1. Yup, this is where we are now. The scandal surrounding the Kremlin’s interference in the 2016 US election has now escalated to a pretty widespread if not trending Twitter hashtag #russiagate, and there is no shortage of conspiracy theories or trumped up charges (be it on the left or the right), or doomsday scenarios surrounding the scandal to keep one up at night (if the nuclear war threats don’t). But, as you might expect, there is also some pretty good humor and cartoonage (and more cartoonage). 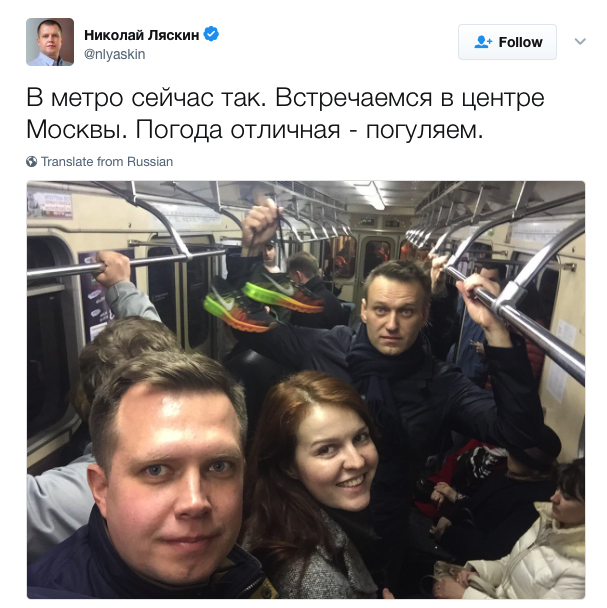 2. In the biggest anti-government demonstrations in five years, thousands of Russians across the country turned up last Sunday for spontaneous walkabouts, at the urging of opposition politician Alexei Navalny (seen above in a Twitter photo, on the metro with sneakers). It began in early March, when Navalny produced a video documenting corruption centered on Prime Minister Dmitry Medvedev (who, as it happened, was on a ski holiday this Sunday). The video went viral, and on Sunday demonstrators chanted against corruption with duck, sneaker, and green dye symbols. Navalny was one of the hundreds arrested, and was sentenced to 15 days in prison for leading an unsanctioned protest. In not unrelated news, on Monday, truckers staged a nationwide antitax strike.

3. Exactly 150 years ago today (yup, it’s a sesquicentennial), in 1867, the US Congress approved the purchase of Alaska from Russia for $74 million. Nicknamed by opponents at the time as Seward’s Folly (after Secretary of State William Seward), it was a crucial move in stemming British expansion in the region. And, just as with France and the Louisiana Purchase a sesquicentennial before, Russia sought the deal largely because they knew they could not defend such a far-flung imperial outpost in the face American expansion. Alaska did not become a state until 1959. We have re-posted a piece from our online archive about how it all got started (when Russia discovered America in 1741, that is). A wide range of sesquicentennial events are planned in Alaska this year.

"On paper it is a wonderful country;
on ice it is what is generally called a big thing.”

The robots may be coming for our jobs, our cars, and our thermostats, but don't expect them to be replacing translators any time soon. We ran two difficult graphs of text through two leading online translation engines to see what we would get. It was not pretty, people. Or, put another way, only the translations by people were pretty...

You probably know that Alaska was bought from Russia well over 100 years ago. But do you know why Russia claimed the territory in the first place? Hint: who doesn't love a fur coat?