Olga was born in 1992 in Bakal, a small town in the Urals where the sole industry is ore-mining. Her childhood was a contrast of dreams and reality: seeing the newly-made ads on TV for Barbie dollhouses, couches, toys, and McDonalds, set against the empty shelves in local shops. However, that contrast wasn’t a cause for stress, more a springboard for creativity, which Olga and her family embraced.

The inability to buy clothes inspired Olga’s mom to become a seamstress, and she quickly gained success among local customers. Olga’s grandfather made Barbie houses that she’d see on TV, and her doll was fitted out with all the furniture she could possibly need. And Olga, after her first visit to St. Petersburg, went straight for McDonald’s, the menu of which she knew by heart thanks to all the commercials she'd seen. She was one happy customer when she got her first Happy Meal at the age of 10. She ate the “legendary” burger, but kept the box it came in and took it back to Bakal.

Back home, she would make regular white bread (the omnipresent nareznoy) sandwiches with a cheese spread and processed ‘ham’ and put them in the McDonald’s box, feeling very proud. Her regular diet consisted of tea, zapekanka (a cottage-cheese bake), eggs and kasha at school, and buckwheat, soups and pelmeni at home. Olga’s grandmother would make a ton of pelmeni and stock the freezer with a full winter's supply. Her mom held down a second job at a supermarket, which meant she would bring home jelly dolphins, ‘teeth,’ and pizza slices, real treasures for a ’90s kid.

That trip to St. Petersburg was part of the family’s eventual move there. They relocated when Olga was 10, to a city that she now describes as the perfect city, and which she still misses from her San Francisco home. For the first year in the former Russian capital, it was just the three of them, with her babushka still coming over and making pelmeni for the freezer. After about a year in St. Petersburg, however, Olga’s parents got divorced, and then it was just the two of them.

On the first day of their life as a duo, Olga and her mom went out and bought a packet of pelmeni with the little money they had left. Svetlana once again put her creativity to use and worked a few jobs: making clothes, and working at factory stores. After four years of hard work, she was able to buy a room in a communal apartment, which was a big step for a single mom, and a whole new experience for Olga.

The communal apartment they moved into in 2003 was home for three families, with one sink between them and no shower. To bathe, they would go to the banya, lock themselves in the kitchen and awkwardly wash themselves in the sink, or go to friends’ places for a shower. Olga’s friends knew that she would head straight for the shower whenever she came over, and had no problem with it.

Luckily, the kommunalka chapter was fairly short, and after about 18 months Olga and Svetlana moved in with Svetlana’s new husband. Life in a separate apartment meant not just showers at home, but also better New Year’s Eve celebrations, for which Svetlana would always create new mayonnaise-laden salads, in addition to the traditional Olivier and crab stick salads. Olga remembers them being both delicious and inventive.

Not long after the move, Olga started university, studying to become a teacher of Russian as a second language. One of her first students was an American in love with Dostoyevsky, Russian history, and, before long, Olga. They got married in 2013, and Olga’s mom made the wedding dress - beautiful and creative, as usual.

Olga studied to become a tour guide while still at university, and quickly learned that she loves to show St. Petersburg off to guests even more than she loves teaching. In her usual creative way, she still takes people on virtual excursions around the city she misses so much, all from her San Francisco home, where she and her husband moved five years ago. 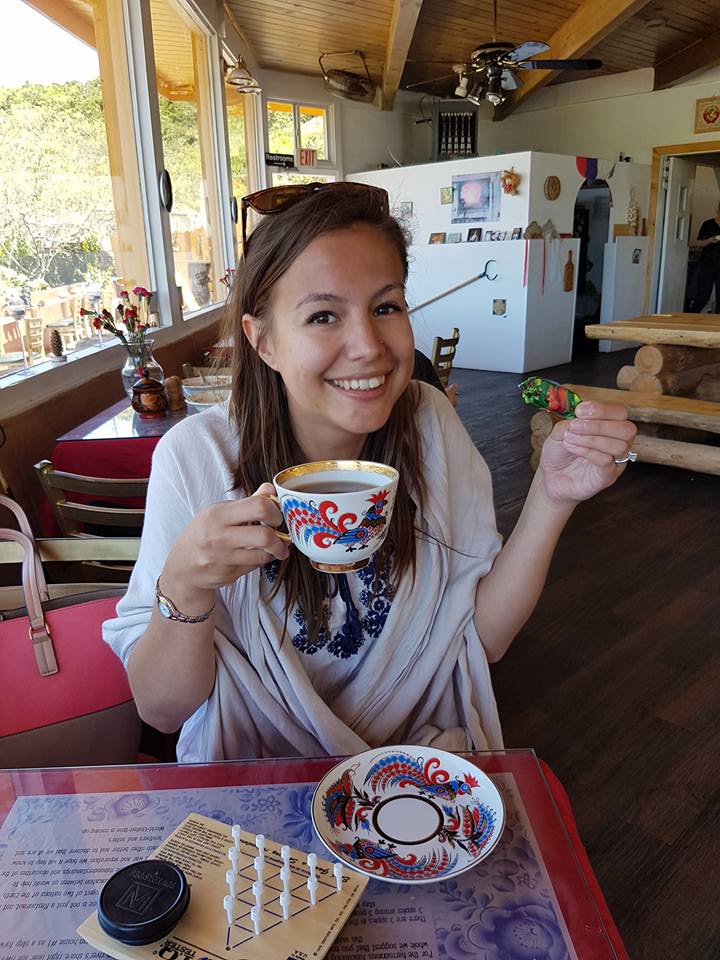 She loves living in the USA, but one thing is non-negotiable: New Year’s Eve must be celebrated in the Russian way, with horrible Russian TV shows, and Olivier and crab-stick salads. Except now they use Christmas ham (unprocessed) in the Olivier, and real crab instead of crab sticks (which contain only crab coloring and flavoring, not actual crab). Husband Doug makes mayonnaise from scratch and suffers through the TV shows, while Olga reminisces about her childhood and Skypes her mom to share the salads and the love.