Boris Babochkin, star of the iconic 1934 film “Chapaev,” would have been 110 years old this Saturday, January 18.

You know how some actors are remembered for that one amazing role, no matter what else they do? Soviet actor Boris Babochkin, who would have celebrated his “eleventieth” birthday this Saturday, once made the “mistake” of starring as Chapayev in Chapayev in 1934, and for the remaining 40 years of his life he never surpassed that role.

Based on real personalities of the Russian Civil War, the film follows a local Red Army commander, Vasily Ivanovich Chapayev. With the help of political commissar Furmanov (whose real-life counterpart’s memoirs formed the basis of the plot), Chapayev organizes his troops and clashes with the White Army. And since – spoiler alert! – the Bolsheviks did, in fact, win the Civil War, there’s no doubt that the Reds in the movie will be victorious, no matter what dangerous and suspenseful situations [video] they find themselves in. 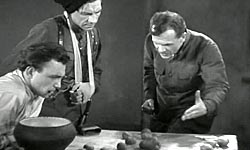 "Where should the commander be? In front, on his dashing steed!"

Babochkin’s Chapayev is a bit of a country bumpkin: a witty, charismatic leader and father-figure to his troops, but a little fuzzy on the nuances of political theory. “Are you for the Bolsheviks or the communists?” the villagers ask, and he says he’s “for the International!” He uses potatoes on a roughly drawn map to demonstrate military tactics, but if his men are in trouble, he throws all that out the window and rushes in to help. “Come to me midnight or later,” he tells his soldiers, “and if I’m drinking tea – drink with me. If I’m eating – eat with me. That’s the kind of commander I am!” Can we really blame the Soviet public for falling in love with the film and its title character? 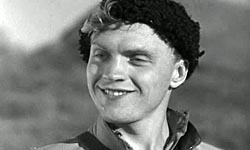 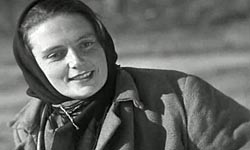 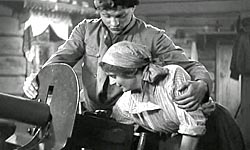 Of course, Chapayev didn’t do it all alone. Besides Furmanov, he had Petka (Peter), his young aide, and Anka the Machine-Gunner (bonus points for a strong, independent female character!). The Chapayev-Petka-Anka combination was later expanded upon in endless Russian jokes.

But it wasn’t just the characters or the story that attracted millions to the film. Up until Chapayev, Russian and Soviet movies had been silent – in fact, even Chapayev was made in two versions, so that even movie theaters without sound equipment could still show it. For the first time, Soviet audiences could appreciate not only the visuals and the montage, but also dialogue, presented in real-time, complete with intonations and regional accents. You can’t get that with white-on-black titles. 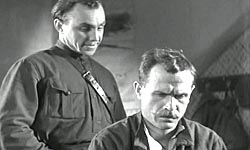 And let’s not forget the film’s political bent! Here was a local commander, a free radical, being trained and educated – slowly, respectfully – by a loyal party cadre, the commissar. Together, they repel the Whites; separately, the hint goes, maybe they wouldn’t have. For all its entertainment value, for all its cinematic innovation, the film owes a significant part of its success – and its original production – to its subtle message in favor of the ruling party. No wonder Stalin reportedly watched it over 30 times!

1937
The trial of 17 leading Communists began in Moscow. All were accused of involvement in a plot led by Leon Trotsky to overthrow the regime and assassinate its leaders.

1793
Russia and Prussia agreed to a second partition of Poland.

A Walk on the Wild Side (of Russia)

The Year's Most Popular on Russian Life