Lenin Claus Is Coming to Town

As much as we'd like to take credit for this tale from the USSR, the story and all images originate from: Komonov, A. Stories about Lenin. Moscow: Foreign Languages Publishing House, 1944, under the title, "The Tree in Sokolniki." The book is a collection of pro-Lenin stories created for English-speaking audiences, especially children. It has been transcribed here with minimal edits both to preserve its intrinsic holiday magic and allow for an accurate retelling among your family and friends.

They did not have far to go for their tree. Right there, in Sokolniki, they picked out a nice tree, one with thick, curly branches, chopped it down, and brought it to the school in the woods.

The children saw how the tree was nailed to two crossed boards so that it would stand firmly on the floor. Then Volodya, the electrician, wired the tree and hung little electric lamps on the branches.

The next day, almost as soon as it was light, the children began to wait for Vladimir Ilyich Lenin. It was still light outside, but the children kept asking over and over again:

"And what if Lenin doesn't come?"

"And suppose there'll be a storm again, will Lenin come anyway or not?"

The superintendent was an old Petrograd worker. He had known Lenin before the Revolution. That is why the children asked him. And he replied confidently:

At last it was evening. And a storm really did begin. The wind began to whistle through the pines and the dry snow curled and twisted along the ground like white serpents. And then great white flakes began to fall from the sky.

The fir tree had already been trimmed. All the toys had been made by the children themselves. There were bears and rabbits and elephants. But the best of all was the rosy-cheeked Santa Claus with his white beard. He sat on the very top of the fir tree.

Time passed and still Lenin did not come.

Suddenly the children heard one of the older people whisper:

"Of course he won't come in such a storm!"

Again the children ran up to the superintendent.

But he only said gruffly:

"Don't keep nagging! I told you that one he said he'd come, he'll come."

Again they began to wait.

Outside, the wind was whistling and the dry snow tinkled against the windowpanes. That is why they did not hear the car coming up to the school. Vladimir Ilyich came out of the car.

He walked up the stairs, took off his coat and hat, and wiped the damp snow from his face. Then he went straight into the big room where the children were waiting.

They recognized him immediately; how often they had seen pictures of Lenin!

But for some reason or other they felt shy at first and stood around silently, not knowing what to do. They just stared at Lenin and kept quiet.

But Vladimir Ilyich did not wait long. He winked slyly and asked:

"Who knows how to play cat and mouse?"

The first to answer was the biggest girl, Vera: "Me!"

"And me too!" shouted little Lyosha loudly.

The children formed a circle. In the middle was the tree. Little Katya was the mouse. Lyosha began to chase Katya. It was easy to catch her. But she ran straight over to Lenin and put her arms around his knees. And Vladimir Ilyich caught her up in his arms and held her way up in the air:

"Now the cat can't get the mouse!" 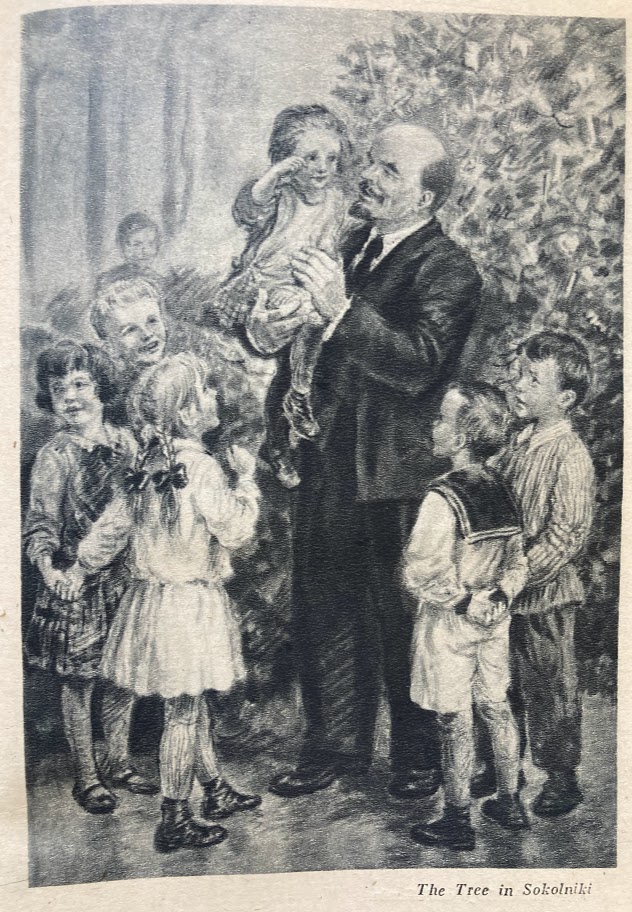 They played for a long time and everyone felt terribly warm.

Just then the door opened and a big grey elephant came into the room. All the children began to squeal and shout with delight. Of course many of them recognized the familiar grey cover from the school piano right away. But who was under the cover? Slowly the cover rocked from side to side and a long trunk waved in front. The elephant's front legs were in felt boots, but the hind legs were in shoes. If you weren't too particular it really did look very much like a real elephant.

The elephant went trumpeting around the tree, waved its trunk in farewell, and again waddled off to the door. And on the other side of the door, Volodya, the electrician, and the school janitor crawled out from under the cover and went back into the room. There all the children were laughing so heartily that Santa Claus, perched on the very top of the tree, shook with the laughter.

There was lots more fun that evening. One of the children cried out:

Vladimir Ilyich took out his handkerchief and tied up his eyes.

Volodya quickly moved the tree into the corner so that there was plenty of room.

Stretching out his hands, Lenin began to walk ahead carefully on tiptoes.

The children scattered in all directions.

Then they began to steal up to Vladimir Ilyich and shout:

And when Vladimir Ilyich was quite close, the children shouted:

Some of them squatted down right under Lenin's hand, but he didn't notice them and passed right by. Then they began to shout:

Lenin saw that the children were very quick and nimble and that most likely he would have to walk around with his eyes closed for a long time.

Then he made believe that he was going straight ahead and suddenly turned around like a flash and caught the first one behind him.

Then everyone began to jump up and down and shout:

And the one who was caught laughed and tried to get away. It was little Senya.

Vladimir Ilyich felt the boy's hair, passed his fingers over his forehead and down his cheek, and at last said: "Senya!"

Senya felt both sorry that he had been caught and pleased that Lenin remembered him.

Then little Katya recited a poem by Pushkin, and right in the middle she forgot. She burst out crying.

Lenin began to comfort her.

Katya stopped crying, wiped away her tears, and said:

Uncle Lenin, don't go away, you stay here and live with us."

Then they all began to run around the tree. Little Katya ran beside Vladimir Ilyich. He was holding her hand. Lenin's hand was big and warm.

Meanwhile Nadezhda Konstantinovna [Krupskaya; Lenin's wife] and Lenin's sister, Maria, had brought a big basket with presents into the room. Lenin had brought these gifts for the children.

Some of them got an automobile, some a trumpet, some a drum. Katya got a doll.

Meanwhile, in all the excitement, Lenin slipped out of the room and rode off.

That was how they celebrated New Year's Eve in Sokolniki in 1919. 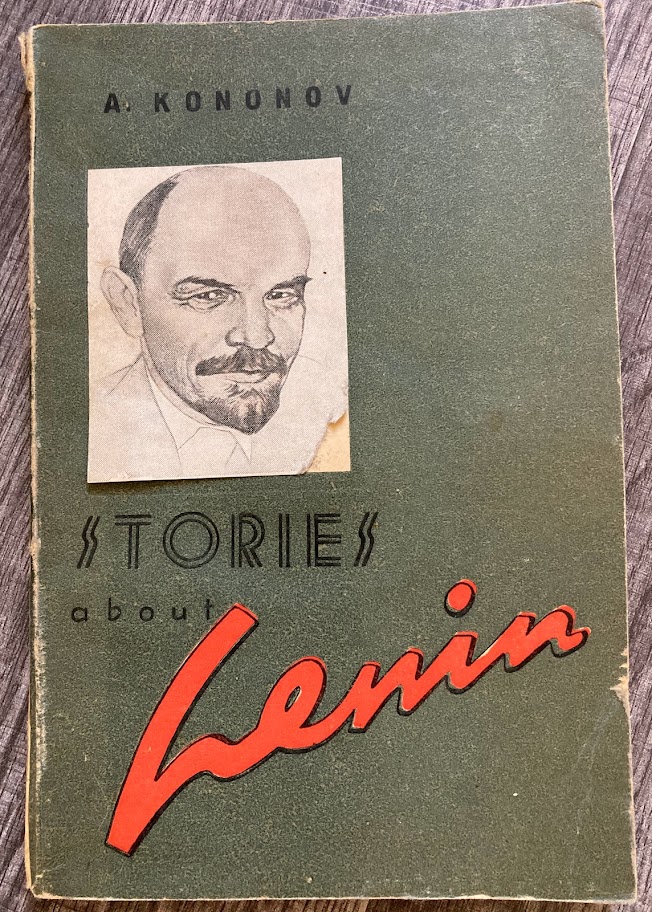 Grandfather Frost and the Snow Maiden

Sailing with the Sun: The Return of Christmas

Like everything else in Russia, the celebration of Christmas is in transition. Our author traces the turbulent history of Russia's Christmas and New Year's holidays.

Why Christmas Toys are Us

The yolka is the centerpiece of Russians' Christmas and New Year's celebrations. And the toys that decorate the yolka have an unusual power.

The Secret Life of a Russian Santa Claus

Alexei Pospelov takes us along on the New Year's tour of a modern day Ded Moroz (Russia's equivalent of Santa Claus).

An effective way to accumulate new vocabulary is to learn words and phrases that have the same root.

Bringing in the New Year

From her village in the Bryansk region, Laura Williams offers a distinctly rural picture of the New Year's holidays in Russia.

It is likely no individual has had more graven public images cast of him than Vladimir Lenin. Recently, a Moscow exhibition delved into the early Soviet regime's search for the "perfect" Lenin, revealing plenty of rejected versions.

Who Invented the Ancient Slavic Gods, and Why?

How it was that in the eighteenth century Russian mythology was trumped-up in the Western manner? Who wanted it? And where did we get Lel, Yarilo and Zimtserla? We explain everything you'd want to know about Russian fakelore.

Don't be fooled: the old man with a white beard and red coat is not Santa Claus. It's Grandfather Frost! Learn how to tell the two apart with this handy list.

Russian Life wishes you a happy new year, complete with movies and marriages.

Ded Moroz; Grandfather Frost; is the Russian counterpart to the Western Santa Claus and other Gift Givers worldwide. He and his assistant, Snegurochka, continue to delight children and adults alike. In 2000, Santa Claus traveled to Russia to meet Ded Moroz for the first time!

1996
Boris Yeltsin signed a cease fire agreement, effective June 1, with the leader of the Chechen rebels.

1994
Aleksandr Solzhenitsyn returned to Russia after 20 years in exile.

1703
Tsar Peter the Great founded St. Petersburg: Peter and Paul Fortress established on a small island in the Neva delta.

The Course of Revolution Is Not Smooth

Our Next Big Thing