When Artists Get on Board with a Russian Protest

The protests shaking Moscow over the past month began as a rather low-profile issue: authorities refused to register opposition candidates from different capital districts for the September elections to the Moscow Duma. The Moscow Duma is a rather sleepy place, where little news has ever been generated, and few Muscovites ever vote in these polls.

Until this year: though the Russian opposition failed to muster sufficient public support for national representation in parliament, many of the activists in Moscow have been quietly building public trust in small municipal posts. This year, those municipal representatives gathered signatures in support of their candidacies for the Moscow Duma. But then those signatures were rejected (ostensibly because they were "fake," though authorities refused to consider evidence to the contrary), and a feeling of injustice pushed opposition supporters out onto the streets for weekly demos, even when the protests were not sanctioned. Police arrested thousands and investigators launched a sweeping probe into "mass riots," though no damage to property was reported.

Images of central Moscow overrun by "cosmonauts" as the fully-equipped OMON riot police officers are informally called, have inspired artists, some of whom are joining the protests. Here are some works of art about Russian police and the multitude of feelings they elicit from the creative community.

Grapes of Wrath, a work by Vadim Sloof, an artist based in Rostov-on-Don

A song about OMON by rocker Andrei Makarevich of Mashina Vremeni

Rapper Noize MC with a track about Lyokha, whose dream about becoming an OMON cosmonaut came true

Artist Philippenzo's new homage to OMON police (above) calls on people not to have fear: "In our country an abnormal situation has formed when law enforcement agencies meant to fight threats often become the source of these threats. The appearance of a policeman in the line of vision of a law-abiding peaceful citizen brings the feelings of worry and danger, a desire to look elsewhere and avoid any contact. After all, this contact does not mean anything good – baseless document checks, demeaning searches, meaningless bans, beatings, detentions at peaceful rallies, planted drugs, torture, and other violations of civic rights."

St. Petersburg-based Rodina collective, which has long played around with the OMON logos in various projects, is offering T-shirts ahead of the protests.

All of these works have continued a long Russian tradition of using the repressive arm of the Russian government for inspiration. Here are a few other works from the past. 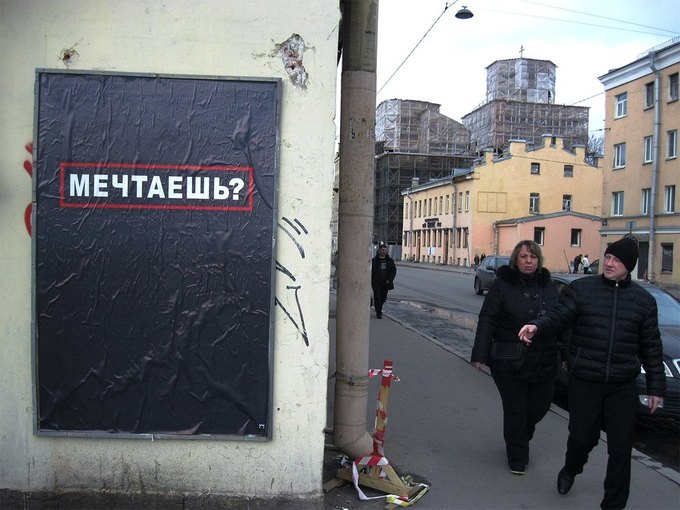 This poster by Misha Marker uses the aesthetics of the Russian police uniform but asks "Are you daydreaming?" A street sign by artist Slava PTRK in St. Petersburg

Finally, Telegram users can create their own works of art by messaging a bot which decorates any photo with rows of "cosmonauts." Here are a couple I created with the @FreeOMON bot, showing riot police marching in a snowy landscape, and admiring the impressively neat rows of pelmeni sold at a kiosk not far from my house. 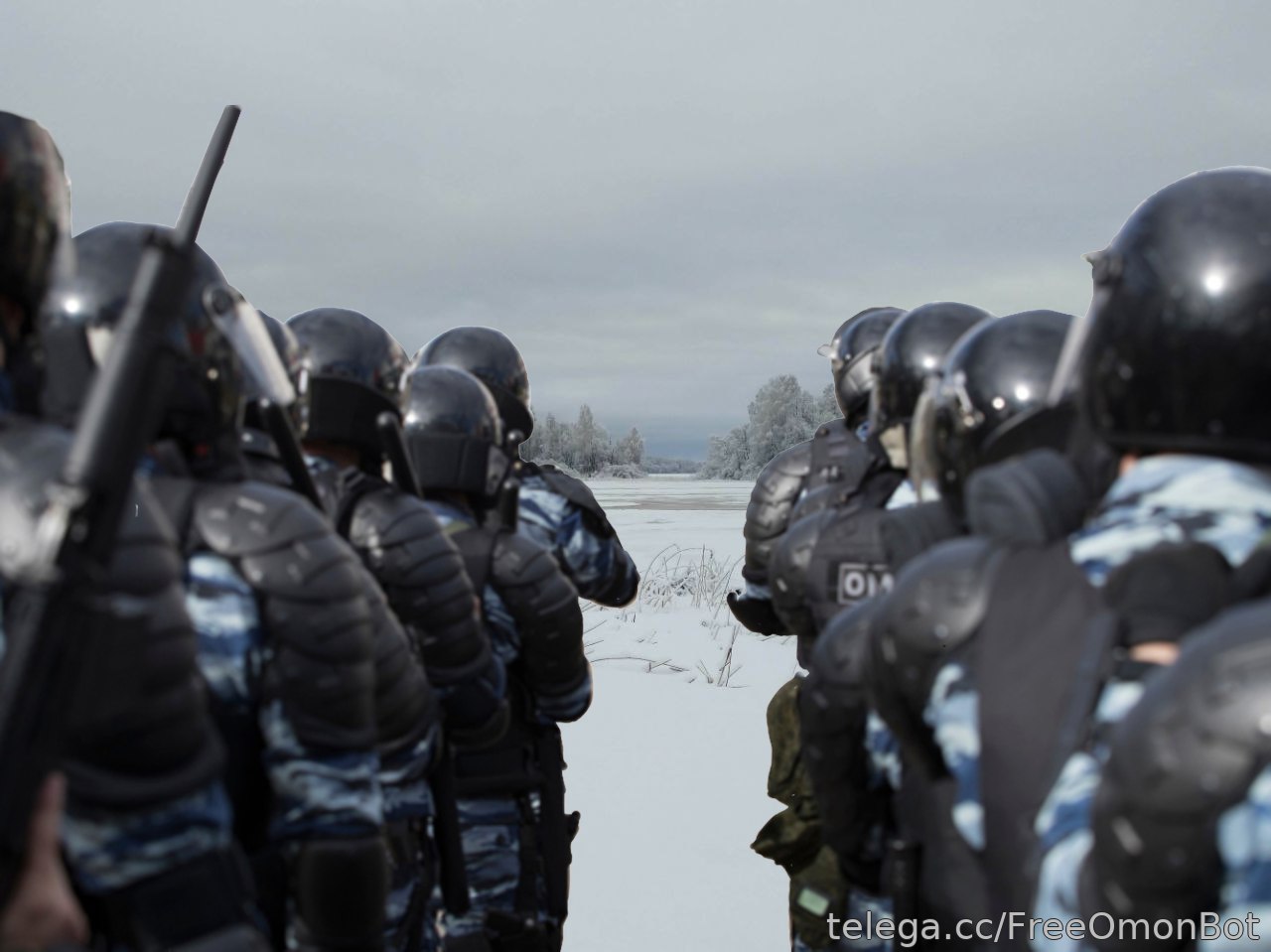 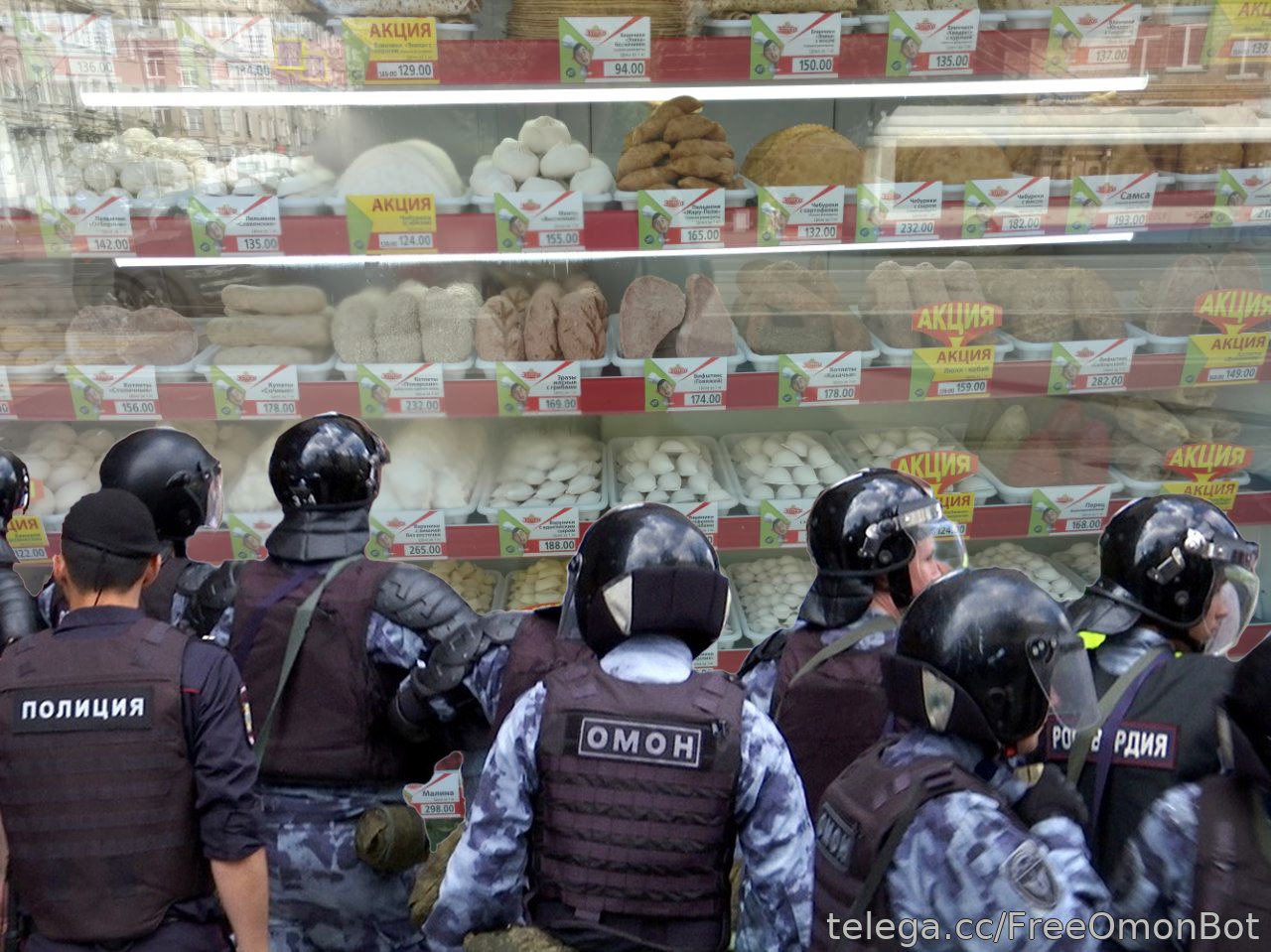