This Sunday, October 27th, would have been the 125th birthday of Ukrainian anarcho-communist Nestor Makhno, leader of the Revolutionary Insurrectionary Army of Ukraine (RIAU).

Let me stop you right there. For the most part, the Whites were not, contrary to popular belief, monarchists. It’s hard to say anything all-encompassing about the White movement, other than its opposition to the Bolsheviks, but the White leaders were products of the February Revolution – “liberals” in the European sense, often nationalists, proponents of democracy and even mild forms of socialism. And if some of them yearned for a strong central authority – well, they would rather be that authority themselves than reinstall a tsar. 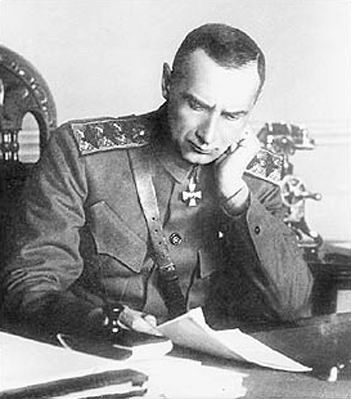 Who needs a tsar when you have Admiral Kolchak, Supreme Ruler of Russia?

In any case, the color palette doesn’t end there. If we dig just a little deeper, we find the Greens: a fancy collective name for a lot of individual peasant revolts. Fighting a civil war, as it turns out, doesn’t come cheap – recruits and food have to come from somewhere! Unfortunately, people don’t always come willingly, and food tends to belong to someone. The Green armies were not so much armies as groups of peasants defending their villages, their families, and their harvests from both War Communism and provision raids by the White Guard.

And then there was the Black Army (RIAU). Don’t let the color metaphor mislead you: unlike the Green Armies, the Anarchist Black Army was relatively organized and had political aspirations. Under the leadership of down-to-earth peasant and surprisingly effective military strategist Nestor Makhno, the RIAU fought off the Reds and the Whites, clearing an area for the Free Territory, an attempt to form an anarchist state within the former Ukrainian Republic. 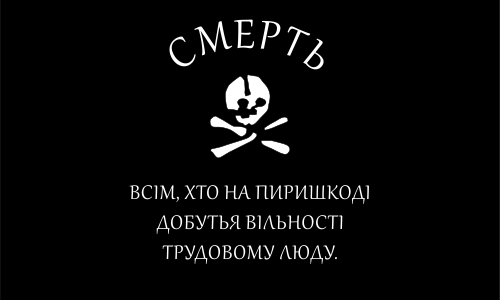 RIAU flag: “Death to all who stand in the way of freedom for working people.”

The principles of the Free Territory included a rejection of all political parties and all dictatorships, including – with a good deal of foresight – the “dictatorship of the proletariat,” espoused by the Bolsheviks as desirable. As the Makhnovists predicted, the dictatorship of the proletariat did, in fact, morph into a dictatorship of the Party, and the Reds’ initial support for the anarchist experiment evaporated. Soldiers deserting the Red Army to join the Black only made matters worse. The two colors joined briefly in 1920 for the Crimean offensive against the Whites, but once the offensive was successfully concluded, in just two weeks it was back to business as usual: lured into a planning meeting, many of the RIAU leaders were executed by the Bolsheviks. Makhno spent a year in retreat before fleeing across the Romanian border to France.

Long story short, there’s more to the Civil War than meets the eye!

(Nestor Makhno’s been dead nearly 80 years – but even now we’re still making songs and movies about him!)