Little is known about the life of this Russian painter and iconographer. His life spanned, roughly, the years 1360 - 1430. It is difficult to positively identify works to Rublev as Russian painters, especially iconographers, did not sign their work until the 1600's. Historians have had to rely on written testimony and the study of the artist's unique style to determine which works belong to Rublev.

Rublev became a monk in the latter part of his life. He, first, entered St. Sergius Lavra and later moved to Andronikov Monastery in Moscow. As a painter, he was associated with Theophanes the Greek {the immigrant master from Constantinople} as a student and/or assistant. Written documentation provides no doubt that Rublev was the author of the famous Old Testament Trinity icon which resided in the Holy Trinity Cathedral at St. Sergius and now is housed in the State Tretyakov Gallery, in Moscow. 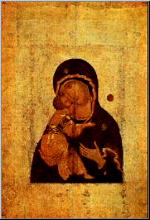 Rublev was tutored in the Byzantine style of icon painting. The emphasis was on the spiritual essence of the work rather than the accuracy of proportions.

The Byzantine style of the 1300's had become less harsh and more intimate. Both of these characteristics are seen in Our Lady of Vladimir, above, which is an early Rublev work.

Rublev quickly developed a style of his own. To the softer impressions of the 14th century Byzantine method, he added something that is uniquely Russian; a mystical, spiritual sense of not being of this world. Rublev's deep, rich colors, gentle lines and faces which seem to gaze, lovingly, at us from heaven itself are what sets him apart from all other iconographers.Other works attributed to Rublev include the Feasts of the Church tier of the iconostasis in the Cathedral of the Annuciation {Moscow}, various icons and frescos in the Assumption Cathedral {Vladimir} and wall paintings done during the early 1400's at the Dormition Cathedral {Vladimir}.

The importance and significance of the Holy Trinity icon lies in Old Testament context. The Trinity includes God the Father, God the Son {Jesus Christ} and God the Holy Spirit. In western thought, the Trinity is generally associated with the New Testament, after the appearance of the Holy Spirit on Pentecost. Rublev portrayed a very Eastern Orthodox bit of theology in his icon. In Orthodoxy, the Trinity is believed to have been in existence from the time of Creation. Rublev's Holy Trinity represents the guests of Abraham and Sarah {Genesis 18:2-15} who announced that Sarah would bear a child in her old age. Many Westerners consider this threesome to have been God and two angels.

The other interesting point about Rublev's icon is the three figures appear as relative equals of the same age. Again, many Western paintings of the Trinity depict God the Father as an elderly man and the Son and Spirit as much younger. This further displays the difference in theology on the issue of the appearance of the individuals of the Trinity.