Arriving fourteen inches tall and discreetly wrapped in brown paper, issues of Soviet Life were an oxymoronic combination of the illicit and overt. The magazine’s presentation suggested what you would read cover to cover: general interest articles that were expansive – “a mixture of things,” according to Russian television personality and former Soviet Life Senior Editor Vladimir Pozner – and assuredly propaganda.

This October marks the sixty-fifth anniversary of Russian Life (nee Soviet Life), and we interviewed Pozner earlier this year to learn about the magazine’s editorial policies at its inception.

Though Soviet Life was limited to a maximum circulation of 62,000 copies in the US in the 1980s, a 1983 review in the Christian Science Monitor alleged that the magazine could sell “barely half that.” How effective could such a publication be as a tool of influence?

First released as USSR in 1956, the publication was allowed as part of an intergovernmental pact between the Soviet Union and the United States that also greenlighted distribution of a USAID publication, Amerika, in the Soviet Union. The magazine was rebranded as Soviet Life in 1965, yet it was never “hard-core propaganda.”

“We made a point of not being too political, but trying just to talk about life in Russia… We wanted to have a balance,” Pozner explained.

Even within the Soviet Union, propaganda was a balancing act. Secret directives repressed information pertaining to issues such as conflict and revolt, unemployment, and suicide or mental illness caused by social strife, while at the same time citizens were exhorted to interpret world events and history through the lens of a state-defined “truth.” It was all about instilling an emotional connection to the Soviet state and its ideals. Yet propaganda abroad had to operate in a freer information space, which demanded less dogmatism, and that the Soviet Union be painted in more nuanced tones.

As Pozner put it: “I never tried to say that, for instance, Leonid Brezhnev was a wonderful human being.”

Because the magazine was directed toward an American audience, Pozner said, “the propaganda aspect of [Soviet Life] was pretty much toned down. Yes, it was about positive things, but it was done intelligently.” Those who worked on the publication understood that they were “addressing a completely different population,” and this also created leeway to print things never seen in most other Soviet publications.

Though he would later have a change of heart when he began to question his beliefs during the 1968 Prague “squashing” of “socialism with a human face,” Pozner learned socialist values from his father Vladimir Pozner, Sr. The family moved to New York City in the early 1940s, where Pozner’s father worked for Metro Goldwyn Mayer, but in the late 1940s, he was fired from MGM and blacklisted due to his pro-Soviet beliefs; it was later proven that he was a KGB operative, though Pozner denies his father ever told him of his espionage work.

Championing ideology was a part of the professional package of a Soviet “soldier” journalist. He might be a punisher of inept fat-cat bureaucrats, a satirist who shredded the reputation of selfish (anti-Communist) states and groups, or a mirror that represented Soviet power to itself. Journalistic work served higher purposes – but there were limits to how much freedom this afforded, Pozner said.

“If you’re a soldier, you get orders and you follow them. And if you follow the order, well, you get some kind of compensation and you may go up in the ranks and you become an officer. One day you may become a general, but you’re still a soldier.”

When working for Soviet Life, Pozner said, his portrayals of Russia were based on principles of humanizing Soviet citizens in the eyes of Americans – “you know, human nature.” His articles ranged from covering “Russian jazz” to reflections on the Cleveland Orchestra’s Soviet tour, on Benjamin Franklin and Thomas Paine, or on American literature.

In our interview, Pozner recalled how he chose the nearly universal trope of the mother-in-law for an article in the magazine that illustrated human sameness across continents and ideological divides:

Mothers-in-law all over the world are the subjects of all kinds of jokes. Right? So when I talk about my mother-in-law, I see the reader kind of beginning to smile. Okay. This guy has a mother-in-law. So do I; I wonder how he treats her. And then I tell her story, which is a very dramatic one.

She was born in Ukraine into a Jewish family. Well, before the revolution, they suffered the pogroms in 1905 and 1907. Some of her very close relatives were killed. Then revolution occurs and she can start going to school because in Tsarist Russia, there was a limit. Only five percent of the students could be Jewish, no more.

She had a sister and they had one coat and one pair of shoes for the two of them, so they would go to school on alternate days because it was cold, and how could you go without shoes and without a coat? It’s a story of how she managed and how she became a nurse, how she married and how her husband was shot during the Stalin repressions in 1937 and how she hid that from her daughter.

Pozner said he felt his tale was effective because of the angle from which it was presented: “It’s the story of a country, also. I could have written my mother-in-law as a typical Soviet senior citizen who enjoys this, this, this, and this, which you don’t have. Okay. Which is a pretty brutal way of trying to show that we’re better than you are.”

Instead, he tells his audience of her hardships, as a way to change his audience’s perceptions. “What I’m doing is I’m drawing a picture that is not black and white, but has different shades.”

Despite enjoying the greater freedoms of writing for a magazine like Soviet Life, the privilege did not exempt Pozner from self-censorship.

In January 1966, Pozner drafted a piece called “Siberia: The New Frontier.” The article spanned two issues, describing his travels through the territory as he met with locals and “Old Bolsheviks,” those who had waged revolution in 1917 and forged on (being exiled to Siberia by Stalin), where “every step was an experiment, a discovery.”

For his travels, Pozner was given a car and a driver. The latter had previously had a job moving prisoners between camps, and, Pozner said, “it was pretty gruesome, believe me.”

Pozner took the piece to the magazine’s editor-in-chief, who said it would need to be vetted by “someone upstairs” before it could be published. Pozner soon heard from a Mr. Pischick, who felt that there were certain aspects of the piece that “needed too much explanation” and therefore should be taken out.

“And that,” Pozner said, “was a very, if you will, intelligent and delicate way of saying to me, ‘There are certain things that you cannot write.’” 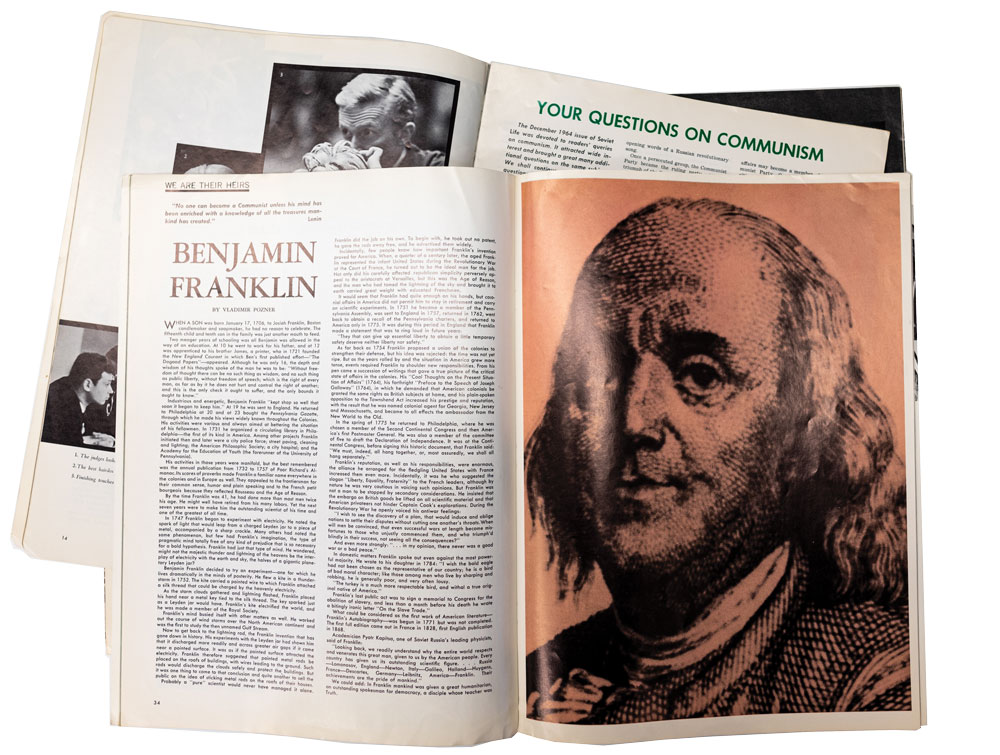 The End. Or just the beginning?

Get access to 8000+ articles like this. Subscribe to Russian Life Online for just $2 a month and you get full access to our 23-year archive, with articles by over 1000 authors. Powerful search to find just what you are looking for. Includes the current issues of the magazine.