Russian Youth, Then and Now

From Pioneers to Generation Z

1. This week marks the 95th anniversary of the founding of the Pioneers – the rough Soviet equivalent of Girl Scouts and Boy Scouts, but with a heavy dose of communist ideology. The Pioneers were disbanded in 1991, and some  former members feel deeply nostalgic for the red bandanas and sense of community that scouting imparted. Branches of the Communist Party hosted events last weekend to celebrate the anniversary, while less nostalgic former members auctioned off their Pioneer tie clips and books.

2. Tsentennials, the Russian version of Millenials, do not have Pioneer scouting or communist ideology to unite them. Instead, as new studies of the first members of “Generation Z” to graduate university are demonstrating, they have a deep love of games, smart phones, rap, and video bloggers. Research into their political lives shows that they’re not too politicized, but are moved by ideas of justice and anti-corruption, while studies of their work habits show that different motivations move them than did their X and Y predecessors. It’s a good guess red bandanas have nothing to do with it.

3. Centennials know their memes. The same is not always true for well-meaning citizens. Novosibirsk resident Anton Burmintsev tries to spice up anti-litter and pro-sobriety signs with pictures of pop culture icons like Iron Man or cartoon characters. But his latest sign, which features a sarcastic-looking man meant to be mocking poor decisions, has itself been mocked for its unironic appeal to folks to pick up their trash. Social media users rushed to offer more appropriately ironic slogans. 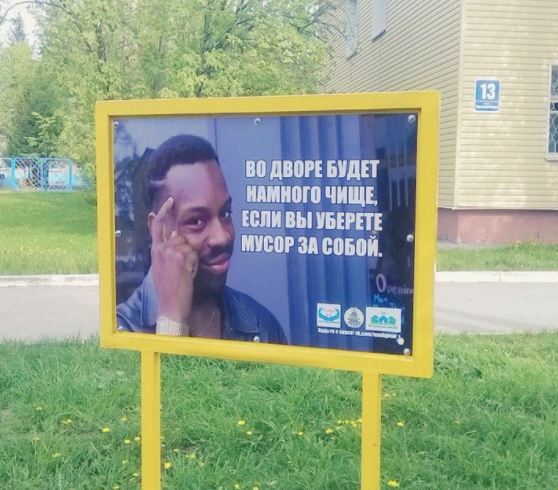 “There won’t be litter in the apartments’ courtyard if the apartments have no courtyard!”
—One of the suggestions for an ironic anti-littering slogan to accompany the photograph of a man sardonically pointing at his temple as an appeal to Novosibirsk residents to pick up after themselves.