Russian sable was once what Russian oil is today. Historians estimate that in the sixteenth century the fur trade comprised some 25 percent of the economy of Muscovy. Sable decorates  Monomakh's Cap, the symbol of Russian autocracy. Yet demand for the fur of this Siberian animal practically obliterated the species in the wild, until the Soviet era, when most sable was farm-raised.

Today, many fur farms are struggling. Warming winters, and a decline in personal incomes over the past six years are two contributing factors to why Russian women don't buy as many fur coats. But another is that Russia is (perhaps reluctantly) following Western trends: fur is becoming unpopular for ethical reasons. Some Russian brands are following European fashion houses and no longer make coats out of fur animals (that is, species like mink and sable, which are bred specifically for their fur).

Some Russians have even started to buy sables and foxes (See Russian Life March/April 2019) from fur farms so that they can have an exotic pet or so that they can rescue them from becoming a coat. We spoke with Yevgenia Fedorchenko, a psychology student in Moscow, who runs one of Russia's more popular Instagram accounts, about her pet sable Umora (Uma for short). Yevgenia chronicles Uma's life in her apartment, from her passion for hiding things (especially socks!), to her gravity-defying leaps, to climbing seemingly impossible obstacles. 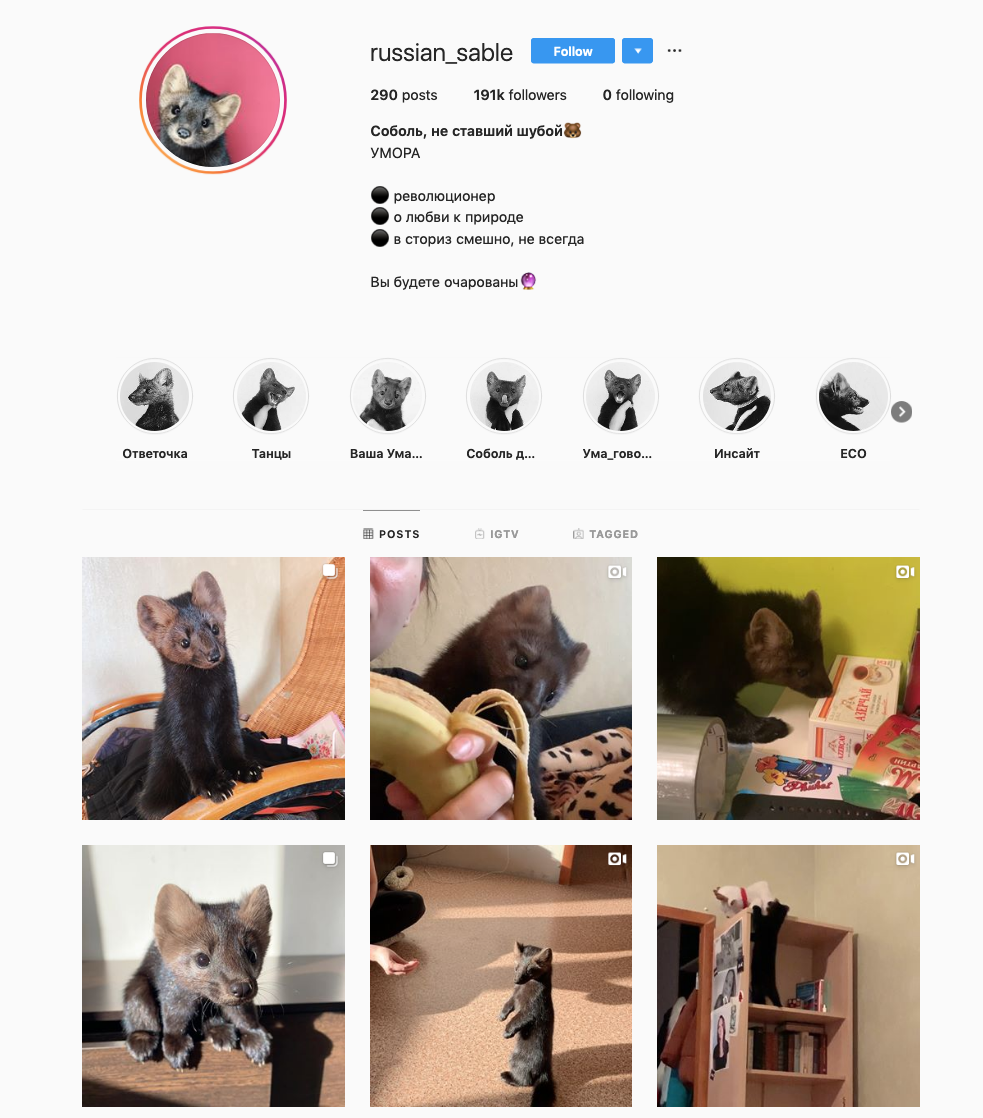 What is the story of Uma, how and where did you purchase her?

I found out by accident that one can buy a sable for a pet when I saw an ad. I fell in love with their cute little faces and thought that maybe someday I would get one, after I read a few articles about sable care (many contained information I later learned was not true).

Click to read about how Uma was purchased from a fur farm.

Years later, I found out that you can also buy a sable from a fur farm. Even though they are not tame there, I decided I must rescue one. Uma is almost two years old, but her age is not entirely clear. I came to the farm to get a month-old cub, but there was a mixup and they sold me an older animal. This became evident when I compared Uma with photos of other sable cubs that were bought from farms. Such purchases tend to be rare, because sable is the most expensive fur (cubs cost around R15,000, or $240) and the animals are difficult to train, but breeding farms don't care whether they sell their product in the form of pelts or live animals.

"I am a personality, not a fur coat!"

Why did you launch your Instagram, do you hope to discourage people from buying fur?

With my Instagram, I have the goal of promoting the ethical treatment of animals, not just fur animals. But of course, the main idea is the total pointlessness of the fur industry. I'd like people to see not just desirable, expensive fur, but a unique species with its own quirks and personality traits.

Is there a large community of sable owners? Would you recommend buying a sable as a pet?

Now there are other sable pets on Instagram, but when I got Uma there were no other accounts. I don't encourage other people to buy sables from farms. It's a species that will consume a huge amount of their owner's time and energy.

The most important thing is for accounts like mine with such pets to honestly show the reality of owning an animal like this, not just the more glamorous side of it.

The less cuddly side of Uma

Of course, it's wonderful if somebody else wants to rescue a sable cub, but it's a huge responsibility, and I am always completely honest. Many of my subscribers would probably describe Uma as evil incarnate rather than a cute cuddly companion. Only her face is cute.

Umora in a pile of flowers

Do you think fur is on its way out in Russia? What do you wear during winter?

World brands are already dictating cruelty-free fashions. The Pushkino Fur Farm (outside Moscow) has gone bankrupt, celebrities talk about not wearing fur anymore, and that makes me happy. I have an ecofur coat [In Russian, ecofur refers to both artificial fur and fabric made of lambswool woven onto a fabric base.] and a down parka with no down. I don't wear any animal products and survive the winter comfortably.

How has Umora changed your habits and views?

Umora has helped me make a change I had been long thinking about. I switched to ethical beauty products, stopped eating meat, started recycling and trying to lead an environmentally-friendly lifestyle. Although it sounds counterintuitive, living with a hyperactive pet made me calmer, I don't get irritated as much. Otherwise, it would be impossible to survive with her.

Can you describe Umora? What were you most surprised by in her behavior?

Umora is vindictive, stubborn and extremely confident. She considers herself to be the center of the universe. She's a very intelligent animal. I didn't expect her to be able to respond to commands like a dog. She already knows six. Umora knows all of her hiding spots and constantly steals things, especially socks. I didn't expect that sables are not only protective of their territory from strangers, but also of their hiding places from their owners.

Uma and a Christmas present

Lessons From the Russian Village

The Plight of Russia's Orphans

Beginner's Guide to Getting Off the Beaten Path in Eurasia