Can you create a Potemkin village in the age of the internet?

You can certainly try… Witness the actions of authorities in the Siberian city of Krasnoyarsk.

You see, in a few days, Krasnoyarsk will host the Winter Universiade. It’s a major sporting event for student athletes, with 58 countries participating. Vladimir Putin is expected to make an appearance. In short: a big deal!

The city has branded the event in style: the mascot is a happy Siberian husky named U-Laika, and the slogan is “100% winter.”

There are just a few problems. First, Krasnoyarsk isn't having very wintery weather: temperatures are hovering around 0° C (32° F), and all the beautiful snow has melted. Yet officials can’t let go of  their dream of showing guests a beautiful Siberian winter, so they have started laying sheets of cotton along city streets. As the local TV channel says, the decision was made to “cover the dirty lawns and walkways.”

The governor of Krasnoyarsk region, Alexander Uss, also asked people to pray for some nice fluffy snow to fall.

“If all of us asked the one who needs to be asked, and there was nice snow in Krasnoyarsk like in Moscow, then I’d say we’ve done everything we can. Let’s ask!”

The city didn’t stop there. Locals filmed city workers planting fir trees to decorate a lonely stretch of highway. As if planting trees in the dead of winter was not Potemkiny enough, this "planting" added something special: the trees had actually been cut down from somewhere else, and were "planted" into rusty pipes that workers had driven into the ground. From a distance, you can’t really tell the difference, right? After all, the Universiade is only ten days long. Chances are, the trees will be presentable from now until the athletes (and Mr. Putin) fly home.

Making cities look nicer than they really are during high-profile events is not uncommon. Crumbling buildings are often cocooned in painted facades, fresh asphalt has been laid on streets over which the Putin motorcade will pass, and lawns have been painted. None of this surprises any one anymore. 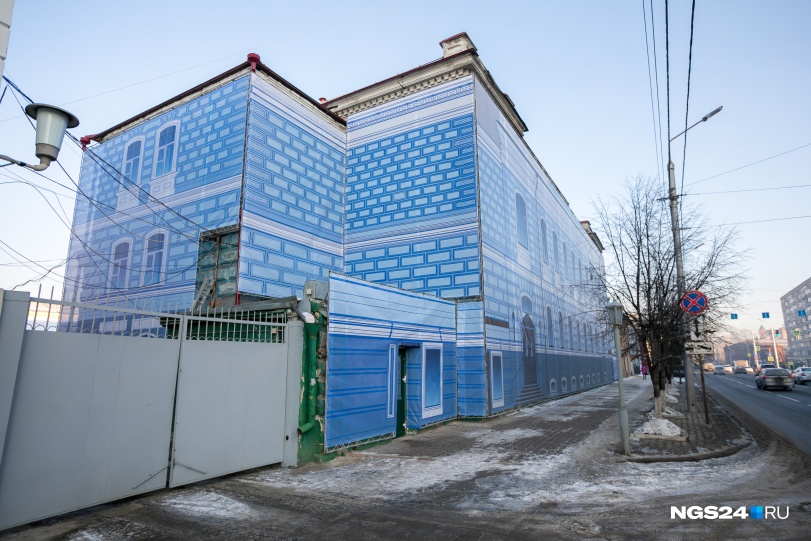 But in Krasnoyarsk, the Potemkinization has particularly irked residents, because in addition to the current snowlessness, the city has been suffering for years from catastrophic pollution.

On days when the smog is particularly bad, authorities call it “unfavorable meteorological conditions.” But locals and the media call such times the “black sky regime.” Such a regime is announced regularly to warn citizens to stay indoors as much as possible, take frequent showers, and keep windows closed. The city has to hose down the streets, and industries need to reduce their emissions by up to 60 percent. On extremely "black" days, citizens are advised to wear respirators and wash their mouths with a baking soda solution.

Just how often does Krasnoyarsk, an industrial city with dozens of automotive, metals and construction factories, experience “black sky” days? In 2016, there were 58, in 2017, 44 days, and in 2018, 30, according to Regnum news agency. Residents don't trust official figures. Activists in the city have demanded more transparency about pollution in Krasnoyarsk. And they have even launched their own air monitoring service in the city, which uploads air quality data on the internet for everyone to see.

Not exactly a welcoming environment for thousands of foreign tourists, right? So, authorities decided to take additional measures. Residents living in houses without central heating and use coal and firewood for heating had special packages delivered to them, containing special “non-smoking” coal. They received flyers with instructions to start burning this coal specifically on March 2, ostensibly as part of an “experiment.”

Coincidentally, the Universiade also begins on March 2. Residents seethed at the hypocrisy. Some wrote on social media that they will pollute as much as possible during the Universiade, just to teach the authorities a lesson. Some are making stickers in which the husky mascot is wearing a gas mask. And an internet flashmob is urging Universiade guests to pack a gas mask. The next anti-pollution protest is scheduled for March 30.