Hitler redirected his 4th Panzer Army to Stalingrad in July of 1942. Stalingrad, renamed Volgograd (1961), sprawls thirty miles along the banks of the Volga River in south-western Russia. To find Volgograd, look directly down from Moscow to the band of land separating the Black and Caspian Seas. Here you will find this industrial city at the crossroads between Ukraine and Kazakh. Today, Volgograd is a beautiful, prospering city. But, in 1942, she was the scene of one of the bloodiest battles of World War II where over 1 million Russia soldiers lost their lives.

By the end of August, 1942, Hitler's 4th and 6th armies were nearing Stalingrad with a force of 330,000 troops. Stalin's Red Army put up a valiant fight and caused heavy casualties to the Nazi 6th Army. On August 23, the German Luftwaffe broached the northern edge of the city and bombed it to rubble. The Soviet 62nd Army, under the command of General Vasily Chuikov, was driven into the central part of Stalingrad. By mid-September, the Soviets controlled only a nine mile strip of the city along the Volga. With their backs to the river, the fight for their city looked hopeless. However, the Nazi troops were tired, low on supplies and weary of an offensive that was taking more time than expected. Again, nature smiled on Russia; winter set in!

The winter counteroffensive was the brainchild of Soviet generals G. Zhukov, A. Vasilevsky and N. Voronov. On November 19/20, 1942, a dual Soviet attack was launched against the Germans 50 miles north and 50 miles south of Stalingrad. The idea was to encircle the German forces and cut them off from each other. On November 23rd, the two Soviet flanks had joined about 60 miles to the west of Stalingrad, successfully encircling the Germans. Hitler would not allow a proposed retreat of Nazi troops from the city to join their fellow units stationed west of Stalingrad. Once again, with winter setting in, Hitler ordered his men to stand their ground in a city which they had bombed into the ground and with insufficient supplies. With 91,000 starving and sick, troops, the German commander in Stalingrad, Friedrich Paulus, surrendered to the Red Army on January 31, 1943. This was all that remained of the over 330,000 4th and 6th Army troops. Twenty-four other German commanders surrendered with Paulus.

The Battle of Stalingrad was a turning point in the war in Europe and demise of Hitler. He lost two armies to casualties and capture, was humiliated and found himself out maneuvered by the unexpectedly talented young Soviet commanders, primarily Zhukov.

The Soviet victory at Stalingrad resulted in Hitler removing his troops from the Caucasus. The 3rd Soviet Army drove west from Voronezh and, in the Battle of Kursk, reclaimed the Caucasus for the Soviet Union. The territory taken by Germany in the summer of 1942, was quickly lost on February 8, 1943. An early thaw enabled the Germans to make their retreat along the Black Sea and regroup for another offensive.

By 1944, the Soviets had managed to push their way into eastern Europe. Finally, the Allies had to deal with Stalin and the fact that he intended to dominate the states which he'd liberated from Germany. This gave him an incredible land mass, a geographical shield for the Motherland from any aggression from the west and increased human resources. Churchill and Roosevelt met in September of 1944, in Quebec. The Octagon conference lasted just five days {11th - 16th} and its product was a plan to divide up Germany into zones of control between the U.S.{the southwest}, Britain {northwest} and Soviet Union {east}. Another conference was held in Moscow {October 9-20} between Stalin, Churchill and U.S. Ambassador Averell Harriman. While agreement was not reached regarding the fate of Poland, Stalin agreed to Churchill's plan to give Romania, Bulgaria and western Greece to the Soviets. Soviet and western powers would share Yugoslavia and Hungary, equally. The next offensive against Germany by the Allies was, also, determined.

At this time, Germany held fast to the western portion of Poland. But, the Soviets were using a somewhat subtle, backdoor approach to dealing with Hitler. By the end of 1944, they had managed their way through Hungary and Yugoslavia, drawing German troops away from their stronghold in Poland. Like a repeating story, winter was setting in and the Germans were low on supplies while the Red Army was fit and well-fed; thanks to a steady flow of provisions from her American allies. At the end of 1944, 225 Soviet infantry divisions and 22 armored corps were sitting along the front between the Carpathians and the Baltic; poised for attack.. Hitler did not believe his own intelligence reports regarding this massive collection of Soviet firepower and forbade a retreat. Thus, he left a mere 12 armored divisions and 50 half starved infantry divisions to cover over 700 miles of the Eastern Front. 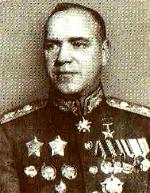 On January 12, 1945, the Soviets launched their offensive against the German front lines in southern Poland. It took the Red Army just two days to create a 200 mile gap in the German front. Soviet General Zhukov captured Warsaw on January 19th. Just one week into the Soviet offensive, the gap in the German line was 400 miles and impossible for a weakened army to span. In a desperate attempt to reclaim some ground, Hitler quickly formed another army under the command of Heinrich Himmler. Nonetheless, Zhukov was sitting on the lower Oder, just 40 miles from Berlin, on January 31, 1945.

The German front was diminished to just 200 miles along the Baltic coast by mid-February. The Soviets took Budapest on February 13th and the reduced Nazi front enabled the Americans and British to cross the Rhine River and begin intensified aerial attacks on Germany. Zhukov and his Soviet troops entered Vienna on April 6th and forced their way, along with Konev's units, across the Neisse. By April 23rd, the triumphant Red Army was rolling into the outskirts of Berlin.

Hitler was holed up in Berlin and hoping that the Allied forces would be distracted by Roosevelt's death on April 12th. This was not the case. On April 25th, Zhukov and Konev completely surrounded Berlin and joined the American forces on the Elbe River. The Soviet troops were less than half a mile away from Hitler's hiding place, in Berlin, when he committed suicide with his mistress and bride of one day, Eva Braun. Their bodies were quickly cremated by the Nazis so they would not fall into the hands of the Soviets. The date was April 30, 1945. Hitler's successor, Donitz, was determined to not let German troops be at the mercy of the Soviets. He handed over some 1,800,000 German soldiers to the British and Americans.

The Soviet offensives against Germany had proved affective and caused great world-wide fear of their leader, Joseph Stalin. He was cunning and determined, no matter how extreme the measures, to keep his country free of foreign occupation. He faced Hitler more boldly than the Allies; possibly because he was fighting for and on his own soil. From the late 1930's, Stalin was frustrated with the Allies hesitancy in confronting Hitler. Conversely, Britain and the U.S. were leery of a man so determined to the point of being paranoid; who traded human life without apparent conscience and who would do to his, so called, liberated states, the same horrors he fought to keep Germany from doing to the Soviet Union.

The last meeting between Stalin, Churchill and Roosevelt was held at Yalta, in Crimea, on February 4-11, 1945. The western Allies didn't find much compromise in Stalin. He was not going to give up any of the territories in eastern Europe which he had liberated from Germany. As for Germany itself, the three agreed to a new post-war zoning which divided the land between themselves and France. They would provide the necessities to sustain live and destroy or control any Germany industry which could be used for manufacturing weapons. Nazi war crimes would be tried and a commission was to be established in Moscow to decide what reparation Germany owed and to whom. Yalta is considered to be the starting point of the Cold War and decades of distrust between the Soviet Union and the western world. Distrust leads to closed doors and the Soviet people were to be shut off from the world for which they had sacrificed greatly and played a key role in ridding of its greatest threat; Hitler and Nazi Germany.