One of the most unique Russian lives is that of Anton Chekhov. Born January 17, 1860 {old calendar} to a humble grocer and church choir director, Anton turned out to be one of his country's best late nineteenth century writers. Along the way, he became a medical doctor {1884} and primary means of financial support for his family. Economically ruined, the elder Chekhov was forced to move his family to Moscow in an attempt to fine work. Anton helped support his parents and younger siblings with the money he received from freelance writing.

At first, Chekhov seemed to have a split personality when it came to his styles of writing. He was a master of of the short, humorous and somewhat seedy story. The Telephone, written in 1886, is one example of Chekhov's sense of humor. At the same time, he wrote several very serious and deep articles about the various faces of human suffering; possibly a way of dealing with the pain and grief a doctor, inevitably, witnesses. One of Chekhov's touching stories of this period, Vanka, also written in 1886.

In 1888, Chekhov was published in the highly acclaimed Severny vestnik {Northern Herald}. His long story, The Steppe, marked the end of Chekhov's production of light pieces. This autobiographical work featured a child's impressions of trip in the Ukraine. Shortly after his success as a serious writer, Chekhov presented his first drama, Ivanov {1889}. His older brother, Nikolay, died that same year of tuberculosis. This play is very heavy and morbid. It is a study of the spirit of the terminally ill and ends with the lead character, a young man, committing suicide.

To the end, Chekhov was never totally satisfied with the production of his plays. While most would, and did, consider his later plays to be very tragic, Chekhov insisted that they were intended to be comedies bordering on farce. This was particularly true of his last two plays, Three Sisters and The Cherry Orchard. Both plays were written for the Moscow Art Theatre, co-founded by the great actor and director, Konstanin Stanislavsky . The Theatre opened its doors on October 14, 1898, and was later re-named in honor of Chekhov. Nevertheless, Anton's works fall into the genre of late nineteenth century Russian Realism and give us a good idea of the travails and joys of life in Imperial Russia. 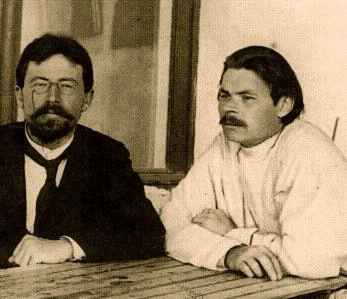 Finally, after two heart attacks, Anton Chekhov died of pulmonary tuberculosis on July 2, 1904 {old calendar}, in Badenweiler, Germany. It was not until after World War I, when the first translations of Chekhov's writings became available, that he was known to the rest of Europe. He gained worldwide acclaim, at the close of World War II, when The Complete Works and Letters of A.P. Chekhov, a 20 volume set, was published. There are still those who question the artistic value of his stories and plays. However, Chekhov's plays are a mainstay of most academic theatre programs and his writings required reading in literature.

What Happened in Khabarovsk?