Jolting along mud-choked roads, sending up spurts of brownish ooze, the district bus is clambering up and down the humpbacked hillocks. Bursting at the seams, it wallows on, rolling from side to side, past tiny villages strung like beads along the roadway. At every bead, which is marked by a rusty shack made lopsided by time, a woman hikes up her skirts to scramble out, invariably stepping straight into a deep puddle and swearing up a storm at Kolka, the driver. The passengers still on the bus spread out more comfortably, wipe the fogged-up windows with their quilted-jacket elbows, and take out calico carriers that now, in place of the jars of milk that had been sold at the market, hold chunks of liver sausage that smell dispiritingly, and to high heaven, of garlic.

Spreading cloths across their plump knees, they break off the crusty ends of not-quite-black bread, peel boiled eggs, and produce from inside their coats the dark wine bottles they call fire extinguishers. They drink straight from the bottle, wiping the pinkish trickle from their chins with their sleeves. The old fellows, sitting in the back, are using their own sleeves to blow smoke into, clumsily waving the gray clouds away. They’re dressed for winter already, in thick, home-knitted turtleneck sweaters, greasy quilted jackets, and gray three-flap hats from their army days. The bus pitches to one side for the umpteenth time. A piglet tied up tightly in a sack gives a grunt, and chickens jammed into a basket with a checkered cloth tied around the top cackle.

The bus bogs down. Grudgingly tossing their cigarettes away, the old lads poke at the youngsters who’ve been rocked to sleep by the jolting, and the womenfolk, young and old, get out to lighten the bus’s load. Branches are cut from roadside trees and chocked under the wheels to turn the waterlogged road into an impromptu timber track. Everyone’s chilly out here, so a bottle makes the rounds again. Now the youngsters are wide awake and off they go, laughing, talking over past adventures, spinning tall tales, and singing songs, because this trip hasn’t been much fun so far.

“Yagorna, how come you’re not stone dead yet? How old are you, anyway?”

“Let up, won’t you? You’re still wet behind the ears, Natakha, but I used to be in the Komsomol. In a Komsomol cell… Time was, someone’d play a ’cordion, and we’d sing and sing…”

“Aren’t you all sung out yet? I bet you don’t even roll off your nice warm stove bench before noon…”

One of the oldsters puffs on his hand-rolled cigarette. “It’s about time to bite the dust,” he says. “What do I keep telling her? She needs to make a hole in the ceiling, to make it easier, you know, for her soul to escape – unless her backside gets stuck.”

The womenfolk pass the wine around, chattering on about the children and how there’s no breathing in the bus, what with the sheep’s wool making your eyes smart and all.

“Pull up, Kolka!” the oldest of them yells. “So the old lads can take a dump, and we can stretch our legs.”

Kolka obediently pulls off to the side of the road, and the bus empties, leaving only the piglet grunting under a seat…

The very last stop on the route was the patty shop in the village of Serezhkino. It was as dark as could be when the bus got in, the deep gloom of five o’clock on a fall evening. The villagers had packed the dining room by that hour, the menfolk coming from work and the womenfolk from the farm. They’d arrived in families, solemnly, bringing their children to buy them lemonade and cookies. The customers swarmed around the counter like flies, and the server – Klava, a mature lady with a bust large enough to balance full wine-glasses without so much as a tremor – swiveled her queenly head adorned with fake ruby earrings this way and that, yelling “Back away!,” “Paws off!,” and “What d’you think the price tags are for?”

Klava handed the goods out following a criterion known only to her. She let this one run up a tab, and had that one thrown out on his ear, and treated this other one to a friendly grin, baring the angular gold caps on her teeth.

The beer was supplied in milk cans and was brewed close by, at the bakery. The menfolk waited for it, milling around in a separate little flock and listening for a telltale noise outside the window. With a twitch of her eyebrows Klava would send two especially trustworthy guys out when the truck arrived, to roll the heavy aluminum cans down a plank. And that’s when a scene of confusion right up there with the collapse of the Tower of Babel began to unfold. The men crowded in, crawling over each other and dropping their money, while Klava, her slitted eyes sunk into her bulldog cheeks, ladled the beer out into mugs. There was a fresh smell, like in a bathhouse.

“Don’t expect any topping off!” Klava snapped. “We’re draining those cans mighty fast. And no, I’m not pouring into any jars.”

Her hands, their thick fingers painted with crimson nail polish, smartly counted out the damp change from a plate holding coins. At last the beer crowd took its seats, pushing the tables together and laying out the skimpy district newspaper with its murky photos of renowned combine operators, and started banging silvery pieces of dried fish against the table tops, so the scales would come off easier. The first mug was drunk in a reverent silence, with much sucking on the fish, closely followed by a second mug, and a third. Then somebody pulled out from under the table a bottle of vodka and slopped it lavishly into the mugs, to beef up the beer. They lit up too. None of the cigarette butts were stamped out on the plank floor, though. Instead they were collected in the empty bottle, which proceeded to smoke like a volcano. 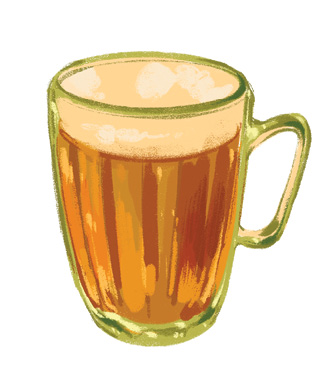 The family men were seated away from all that. They dug their forks into their beetroot salads while the womenfolk dropped their thick wool headscarves onto their shoulders, wiped the sweat from their brows, blew on their glasses of tea, and tore into buns stuffed with fruit puree or rice. They didn’t throw the crusts away but dropped them into wide-open pockets, for the birds at home. The older gals were partial to the dried-fruit drinks, which they picked up from a tray, carried to a table, tottering all the way, and drank matter-of-factly, cramming the sticky apple and apricot slices into their toothless mouths. The little kids scampered among the tables, begging for candy or kopeks, and then dragged a kitten in from the street and played hide and go seek under the tables.

The patty shop’s greatest claim to fame was, of course, its hot meat patties. The young divorcée Lyubka, Klava’s assistant, made them in house, and put so much of her love and hopes for marriage into them that they came out exceptionally well and so tasty that people took them home for special occasions and for no particular reason at all.

Flies buzzed merrily beneath the ceiling and settled unenthusiastically on the sticky fly strips, but no one paid them any attention. A little mouse had a nibble on a sack of flour and scuttled away – but this was the countryside, so the cat was right on it.

They sat there in their no-nonsense way for a long time, until the last bus was ready to leave, as signaled by the bus driver barking into the dining room, “Finish up, guys, we gotta go.” Flashing a happy smile, Klava poured him a nice brimming mugful with a chaser and gave him a patty hot from the oven, because in her line of work, her earnings depended on the bus operator… The other drivers who were spending the night somewhere near the patty shop were still sitting around, but our folks, pushing each other’s quilted behinds, got back on, and the bus, cheerfully breathing out stale booze and garlicky patties, and unsteady as a pregnant sheep, sloshed its way along the mud-choked roads of Russia as the gray murk gathered outside the windows.

The End. Or just the beginning?

Get access to 8000+ articles like this. Subscribe to Russian Life Online for just $2 a month and you get full access to our 23-year archive, with articles by over 1000 authors. Powerful search to find just what you are looking for. Includes the current issues of the magazine.