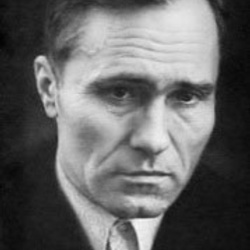 VASILY SHUKSHIN (1929-1974) was the most visible and prolific Soviet Russian artist of the sixties and early seventies. He directed five award-winning movies, was a popular and prize-winning actor in over 20 films in just 16 years, and a writer with over 130 short stories, 12 works for stage and screen, and three full-length novels to his credit. The eccentric, soul-searching, and rebellious misfits in his stories, and their metaphysical quandaries, are not only emblematic of his times, but anticipated the themes and protagonists of the writers of the late 1980s, whose work marked the end of Soviet fiction and the rebirth of Russian literature. Credited with revitalizing the short story as a genre in Russian literature, Shukshin was posthumously honored with the Soviet Union’s highest literary prize following his untimely death at the age of forty-five.

Cutting Them Down to Size (16: Wisdom and Wit)
From the Childhood Years of Ivan Popov (June 1997)