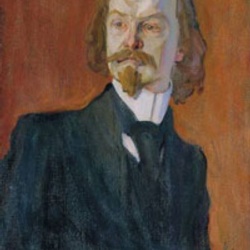 KONSTANTIN BALMONT (1867-1942) was a prolific poet and translator of Russia’s Silver Age of poetry. Born into a noble family and raised with a love for languages, literature and theater, he had his first poems published at the age of 18. A leading light of the Symbolist movement, he was a tempestuous soul who was repeatedly at odds with the government, first of Tsar Nicholas, then of the Soviets. He and his family left Soviet Russia in 1920, and he lived out the remainder of his life in France.