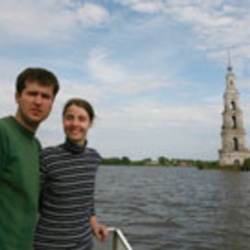 GEORGE SHPIKALEV was born in Tver and his favorite childhood toy was his grandfather's old camera, which he would lug around even without any film in it. He entered Moscow State University's journalism faculty in 1998 and soon embarked on a career in photojournalism. George also combines his love of photography with another passion: cars. His wife Maria, also a graduate of MSU journalism faculty, shares his passion for travelling. George and Maria enjoy driving around Russia and capturing beautiful images and impressions. In 2006, George organized an expedition from the Barents to the Black Sea, spending three months in an off-road vehicle with his favorite camera and lenses, a portable gas stove, tent, and of course his loving wife. A photo album of the trip, Russia: North to South, containing George’s photos and Maria’s texts was published in 2007. The next year found the couple in Yaroslavl, working on the special anniversary edition of a photo album Yaroslavl: 1000 Years of History and Culture.