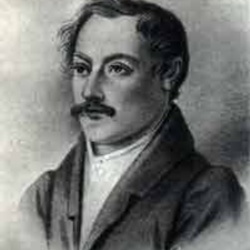 ALEXANDER ODOYEVSKY (1802-1839) was a Russian poet who participated in the 1825 Decembrist unprising. He was exiled to Siberia, and, as his guilt was judged to be less serious, later was transferred to the Caucasus, where he had to serve in the army as soldier. Odoevsky’s talent was not great, but he was greatly respected for his kind and honest character. Some went so far as to compare him to Christ. He died in in the Caucasus in 1839, from malaria. The great writer Mikhail Lermontov, who was his good friend, wrote a poem in his memory. His place in the history of Russian literature was secured by his poetic reply to Pushkin’s poem “Message to Siberia” (Poslanie v Sibir). In fact, his line in that poem, “Iz iskry vosgoritsya plamya,” led Vladimir Lenin, a half century later, to name his clandestine newspaper Iskra and to print this line as and epigraph atop every issue (for which Odoyevsky cannot be blamed).

Prophetic Strings, Their Fiery Sound (09: Beyond the Urals)
The Sixth Night (32: Musical Writing)