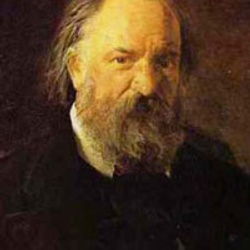 Alexander Herzen (1812-1870) was a writer, journalist, philosopher and revolutionary. The illegitimate child of a rich noble father (family name Yakovlev) and a 16-year-old German woman, he graduated from Moscow University in physics and mathematics, where he became radicalized. He was arrested in 1834, spent some time in exile, and finally emigrated in 1847. From London he launched his journal Kolokol (The Bell), and other publications propagandizing against the tsarist regime. For some time, he was one of the most popular editors and journalists in Russia, even though all of his publications were banned by the tsarist government.

The Tales Behind the Frames