There is nothing like a good old Russian ochered (line) to get close to the narod (people) and get some inside info.

Standing in line, Russians tend to show solidarity, to open up and loosen their tongues. The perfect environment for a journalist... So I decided to join the line queuing up outside the gigantic Bosco store in Sochi Olympic Park and open my ears.

On line in front of me are a couple of forty-something ladies from Krasnoyarsk who say they made the trip all the way from their native city by train. It took them four (!) days to get to Sochi, but only cost R5000 per person ($160). Well, you get to travel in a platskartny car for that price (no compartments and a common corridor), but what wouldn't a true fan do "to watch competitions in half pipe and snowboard." As it turns out, Krasnoyarsk is to host the 2019 Winter Universiad sporting competition, so half-pipe and snowboarding are are gaining in popularity among Siberians. 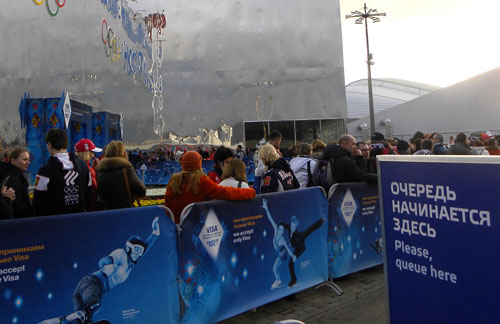 Behind me in the ochered is robust, square-shouldered Oleg. He has a strong chin and a bottomless supply of dirty jokes. He too is from Krasnoyarsk, but he’s come for the hockey. He seems rather wealthier than the pair of women in front of me (he confirms my suspicion by later spending R55000 – nearly $2000 – on Bosco’s Olympic-branded clothing). I don't dare ask this former wrestler what sort of business he is in, but it’s a fair bet it is not a dot.com venture. More like a market krysha (protection racket). But who’s judging?

“I came here to see my buddy Syomin [a NHL forward playing for Russia],” Oleg said. “We've known each other since we were kids in Kranoyarsk. I also wanna have a word with that Canadian defenseman who checked Sasha and gave him a concussion that took him out for a month. That Alex Pietrangelo guy from St. Louis.

“I already bought a ticket to make sure I will sit right behind the Canadian team’s bench. I’m gonna find this Alex and offer him a couple of tender words. I speak enough English...” Oleg then graciously displays his vocabulary, which seems to have been primarily taken from the letter F in his Russian-English dictionary.

If I were Alex Pietrangelo, I’d go easy on checking Syomin during the games.

After Oleg found out I was working with NTV+ channel, he took off his knit hat to me, saying he avidly watches all the NHL matches we broadcast. And when he learned my name was Mikhail, he shook my hand to the point of nearly breaking my fingers: “My dad is also Mikhail! Great name! I tell ya – you have a problem here with someone, jus' gimme a call, here's my Sochi mobile number. I know plenty of locals here, even some volunteers who work on the cross-country ski course.”

Apparently, one of Oleg’s friends was assigned to work with a shovel – to fix the snow on cross country ski paths. Due to high temperatures, the snow in Sochi is a bit soft in the mountain cluster, so the course workers are spreading ammonium nitrate (a normal practice in ski competitions). The problem is, this can make the snow icy, and when you ski on it, it breaks into icy particles and leads to falls (like when Russian skier Ustyugov fell over a fallen Swedish racer and missed an almost certain gold).

So now the problem is being solved manually, by Oleg’s friend (and others) with a shovels.

“Nothing can’t be solved by a Russian muzhik with a shovel!” Oleg jokes. And he continues: “Trust me – when we host the Universiad in Krasnoyarsk, we won't have that problem. It was -35C when I left for Sochi. We could even hold a Winter Olympiad, let alone the Universiad.”

At this juncture our ochered began to pick up speed and then, just when we were about to enter the store, a group of Olympic officials cut right in front of us – bez ocheredi! – led by a very presentable volunteer in his late forties.

“Ne ponyal! (Excuse me!),” Oleg cried. “Who the hell are these nagly (pushy) guys to cut in line and get into the store?!”

“Olezhka,” I offered, “these must be Olympic VIPs (indeed, they were members of a delegation from Omega – the official Olympic timekeeper, and as we know, Time Waits for No Man).

“Ah, vonichiyye i potniye, that’s what they are!” he smirked.

“That’s our Krasnoyarsk definition of ‘VIP’,” Oleg retorted impatiently, aghast at my Muscovite stupidity. “Vonyuchiye i Potniye,” (Stinky and Sweaty) he said, slowly, so that I would get it.

Get undressed and read the news till you sweat