The Loss of Laura Williams

Laura Williams, a long-time contributor to Russian Life (and author of the wonderful memoir, The Storks' Nest: Life and Love in the Russian Countryside), passed away suddenly on October 28, 2018. We are heartbroken at this loss of our friend and colleague.

Laura had lived in Russia since 1993, when she moved there to start up the first World Wildlife Federation office in Moscow. A few years later, she met and married the amazing nature photographer and environmental worker, Igor Shpilenok (their meeting and marriage is chronicled nicely in The Storks' Nest, and in this article), and they made a life together in Chukhrai village in Bryansk Oblast, near where Igor had established a nature preserve.

For many years, Laura and Igor worked tirelessly on environmental issues, and recently Igor traveled to every single Russian nature preserve in a specially outfitted vehicle; Laura and their two boys, Andrei and Makar, joined him for some of the trip.

Laura always had a love of horses. And several years ago she turned that love into a mission to use these wise beasts to teach people about the world and their place in it. With her herd of eight horses, her Herd of Joy, she held horse-inspired workshops and retreats in Chukhrai, but also in locations all over the world. Her goal, she wrote, was to help people "connect with nature through horses and to join a growing community of people seeking heart-based communication and meaningful relationships with other human and non-human beings." And, judging from the outpouring of sympathies to her Facebook page, she built a network of fellow travelers in her journey that covers the globe.

Laura and I met over the internet sometime in the early 2000s. She offered to write some articles for us, and there followed a fruitful collaboration, in which she wrote articles on everything from the beekeepers of Bashkortostan, to people working to save bears, to wild tulips in Kalmykia, and the distant Kurile Islands. But surely her most beloved articles among our readers were her "Notes from a Russian Village," about life in Chukhrai. She went on to develop that series into The Storks' Nest.

I met Laura and Igor just once in person, about 10-12 years ago, when they happened to be passing through Montpelier, Vermont, and we shared a meal together in town. I don't remember what we talked about, or why they were coming through this area, but I remember being struck by how profoundly sincere and down to earth these two people were. I felt lucky to know them and be working with them.

Mikhail Mordasov and I had planned to stop by Chukhrai in 2015, during our trans-Russia trip for The Spine of Russia, but at the last minute we had to cancel that side trip because it would have been sorely rushed. I called Laura from the side of the road somewhere a few hours' drive west of Bryansk, and promised I would come back another time for a visit. Sadly, I will now never get to see her astride one of her treasured horses, galloping through a pasture outside Chukhrai.

As I thought back over the many pieces Laura wrote for our magazine (over two-dozen articles between 2002 and 2014), I kept returning to her wonderful story about Chado, their runaway dachshund. We had many people write in to tell us how much they loved that story, and so I felt that the best tribute we could offer to her work with us was to republish this popular and beloved piece.

My own daughter immediately fell in love with Chado when she read the story, and I later gifted her a print of Laura's photo of the rambunctious dachshund. It has been hanging on her wall for over a decade now, so I went into her room just a few minutes ago to look at the photo again. There I saw that she had hung from the photo's frame a quote that, upon searching the internet, I found was by the Argentinian writer Jorge Luis Borges. This, along with Laura's own story about Chado, is, I feel, a fitting quote with which to end this sad and all too inadequate tribute to a friend and colleague.

“A man sets himself to the task of making a plan of the universe. After many years, he fills a whole space with images of provinces, kingdoms, mountains, bays, ships, islands, fishes, rooms, instruments, stars, horses, and people. On the threshold of death, he discovers that the patient labyrinth of lines has traced the likeness of his own face.”

To Laura's family and friends extend our deepest sympathies. You will be in our thoughts. 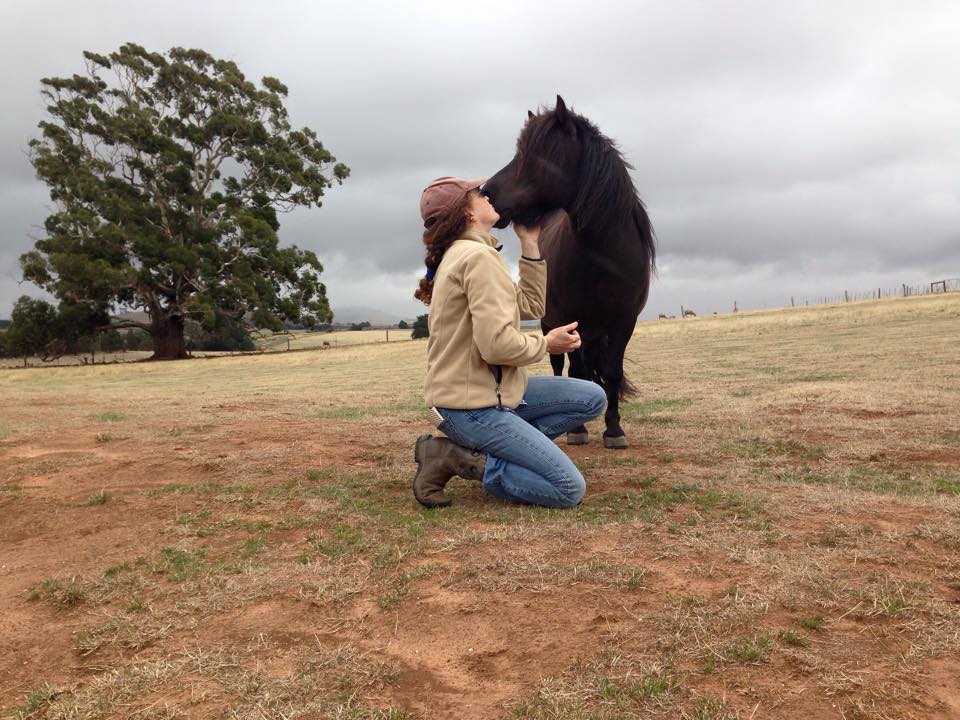 Laura with one of her horses (photo credit: Igor Shpilenok)

1949
USSR terminates its Treaty of Friendship and Cooperation with Yugoslavia.

The First Pancake is Always Lumpy

Omens, Blacklists and Vampires, Oh My!