The Final Frontier of Communism

“We’ve inspected the sky inside and out. No God or angels were detected,” reads a couplet from Mayakovsky’s poem, “The Flying Proletarian.” These lines (which are far pithier in Russian) are printed below Yuri Gagarin’s smiling face in a futuristically designed 1964 Soviet poster. Above Gagarin’s head soar the names of famous cosmonauts: Tereshkova, Bykovsky, Popovich, Nikolaev, Titov. Multiple ideas converge in this one poster: state atheism, space exploration, glorification of the cosmonauts, and — lingering in the title of the quoted poem — celebration of what was to be considered a proletarian achievement. 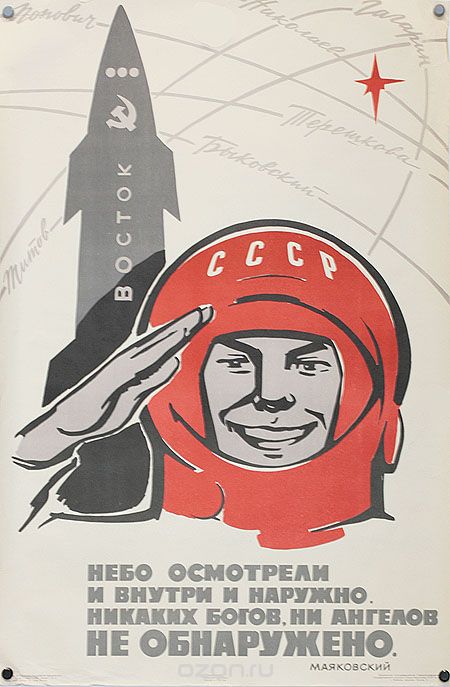 The above mentioned poster. / Artist: I. Radunskii

This is just one of many Soviet propaganda posters celebrating space achievements. Many more are findable through the Twitter account Soviet Visuals, which tweets photos, film clips, and propaganda photos from all periods of the Soviet Union and has uploaded an especially large collection of space-related propaganda. Their collection is by no means comprehensive and leans towards items that are easily duplicated and shipped, since the account often reprints and sells posters. But it gives the average social media user a sense of how pervasive propaganda about space was, at least for one decade before, according to historian Slava Gerovitch, “failures of space technology and cosmonauts’ errors began to chop away at the mythological perfection of the space program.”1

Soviet Visuals’ collection of propaganda can be divided into five parts. The first paints a public image of cosmonauts as proletarians in every sense of the word. On the one hand, the cosmonauts are everymen (or in Tereshkova’s case, an everywoman), ordinary people who do everyday activities. Gagarin, for example, cared for his baby and goofed off (within appropriate limits) in school, like everyone else. 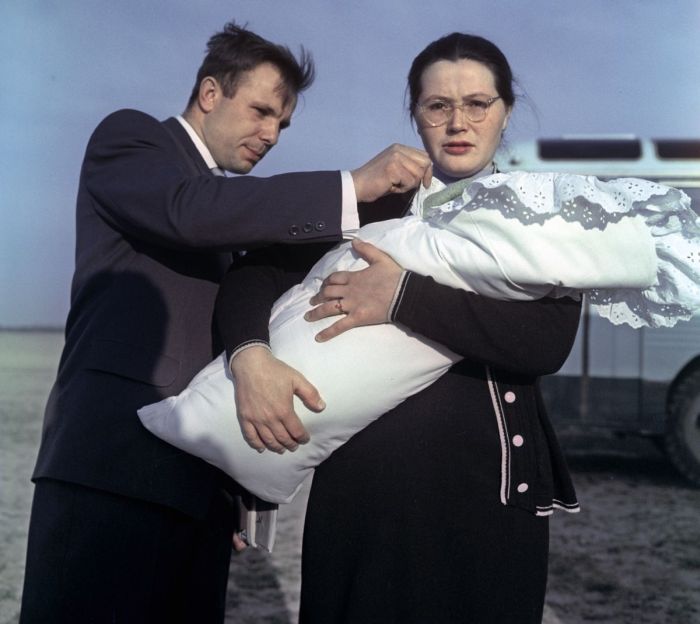 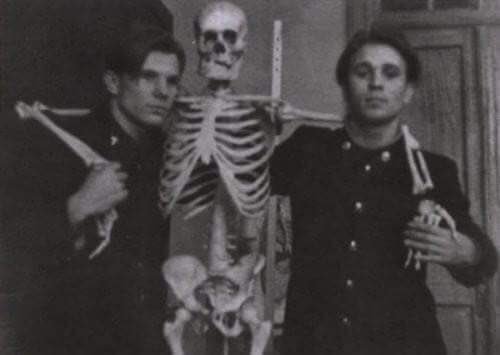 On the other hand, cosmonauts publicly represented the “New Soviet Man,” an ideal that Khrushchev sought to promote in the early 1960s. The New Soviet Man was to make up a “new historical, social, and international community of people with a common territory, economy, and socialist content; a culture that reflected the particularities of multiple nationalities […] and possessing a common ultimate goal: the construction of communism.”2 So the cosmonauts were supposed to see their work as achievements of a Communist society. They weren’t just aviators and scientists; they were part and parcel of the project of spreading Communism abroad while solidifying it within the Soviet Union.

Indeed, the next category of propaganda within Soviet Visuals’ collection focuses on international collaboration and competition. The U.S.-Soviet space race was, of course, a site for great power competition. The Soviet government created a space program called Interkosmos to train cosmonauts and host joint missions with Warsaw Pact countries, in an effort to demonstrate the strength of the Communist alliance against the capitalist West. In addition to aiding Warsaw Pact countries, Interkosmos facilitated space flights for Third World countries. The stamp and poster below commemorate collaborations with Vietnam and Syria, sending a message that the most influential Communist country was best equipped to bequeath developing countries with scientific knowledge. 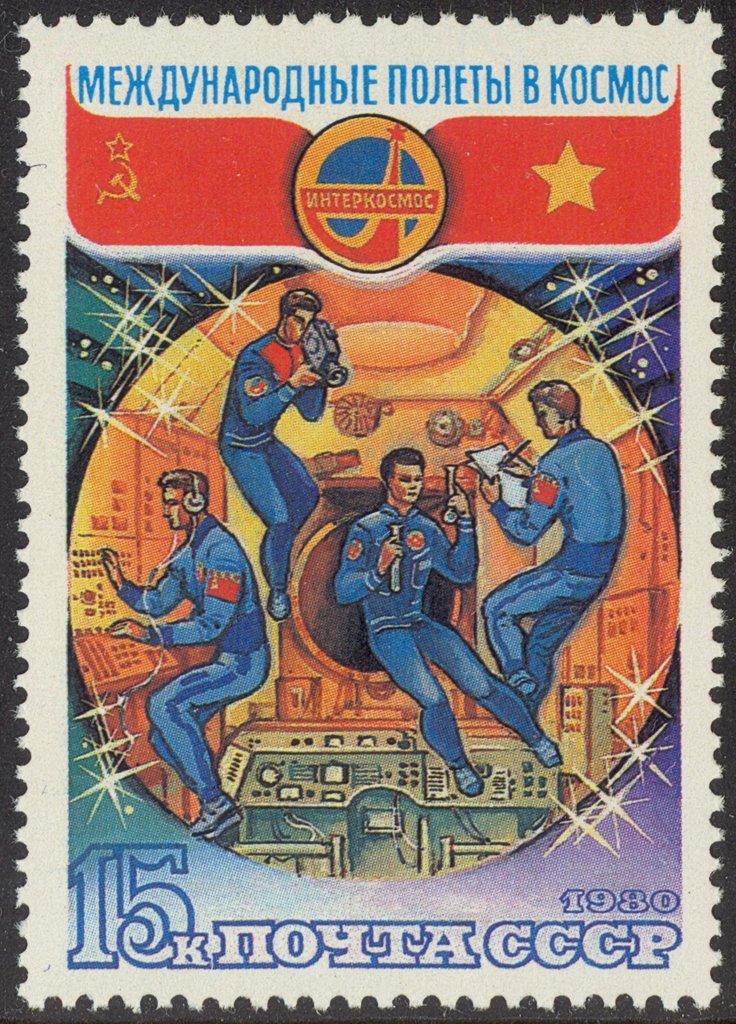 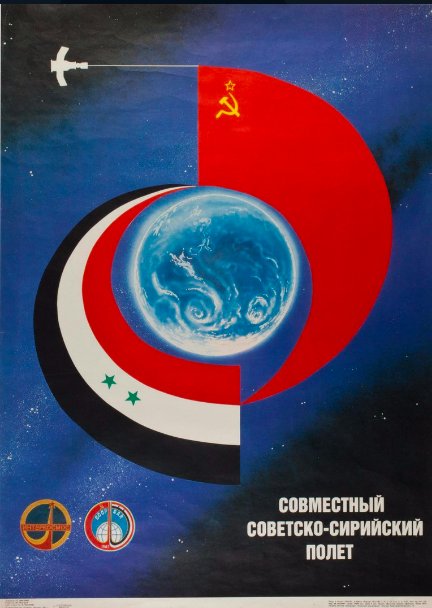 Perhaps ironically for a Communist country, successes in space became consumable. Gerovitch describes how Gagarin became a “consumable commodity,” appearing on chocolate wrappers and in lifestyle photo sessions.3 It wasn’t just individual cosmonauts, but the whole idea of the cosmonaut that became something one could buy. Porcelain figures of generic cosmonauts proliferated in the 1960s. These generic figures enabled Soviet citizens to place themselves in the figures’ shoes (or suits) and feel that even if they were not cosmonauts, the cosmonauts’ achievements were achievements of the entire socialist society, including themselves. 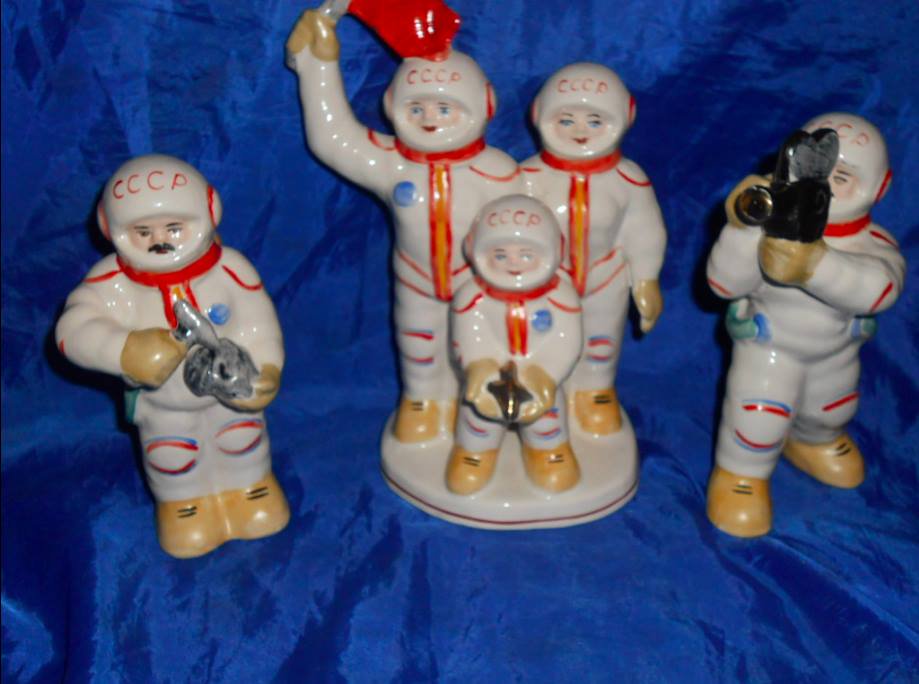 Most of the previously discussed propaganda centers around Yuri Gagarin, the first man in space, but a decent amount features Valentina Tereshkova, the first woman in space. Soviet Visuals does not have much propaganda featuring Valentina Tereshkova, but given what they have posted, it seems fair to say that a lot of propaganda featuring Tereshkova turned her space flight into an achievement primarily of women’s equality, as opposed to an astronautic feat in its own right. And even then, the propaganda was quick to relegate Tereshkova to the more traditional roles of wife and mother, especially after her marriage to fellow cosmonaut Andrian Nikolayev.4

Nevertheless, some propaganda gave due recognition to the original purpose of Tereshkova’s mission. In combination with Valery Bykovskii’s flight aboard Vostok 5, Tereshkova’s mission was intended to provide insights into human biology in space and test improvements in rocket systems. The below poster commemorates their joint mission. 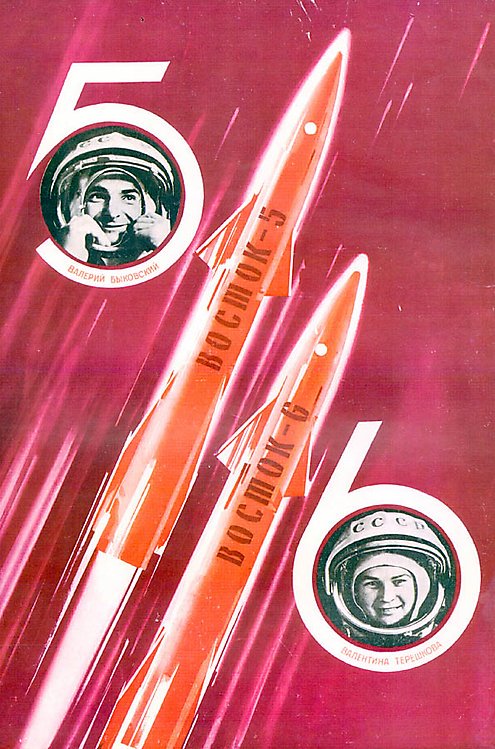 Sylvester, Roshanna P. “She Orbits over the Sex Barrier: Soviet Girls and the Tereshkova Moment." In Into the Cosmos: Space Exploration and Soviet Culture, edited by James T. Andrews and Asif A. Siddiqi, 195-212. Pitt Series in Russian and East European Studies. Pittsburgh, PA: University of Pittsburgh Press, 2011.

1974
Soviet ballet dancer Mikhail Baryshnikov defected to the west while touring Canada with the Bolshoi Ballet.

Of mutts and men