Russian Ladies of the Avant-garde

Russia's avant-garde period was possibly the most dynamic of any in Russia's history. Most consider the greatest artists of this time to have been Suprematist artist Kasimir Malevich, Constructivism founder Vladimir Tatlin (well known for his Monument to the Comintern [1919]), abstract Impressionist Wassily Kandinsky and revolutionary artist and photographer Alexander Rodchenko.

During the early years of the 20th century, Russian artists, anxious to learn the latest in European styles, traveled to cultural centers such as Paris and Munich to study. They quickly picked up on the latest trends and styles in all art venues. By the onset of WWI, Russian artists had not only learned the European techniques and styles, but had used them to develop something truly new and unique. The vision of a new world presented by the Bolsheviks and the Revolution played well with these artists, creators of Russia's "new" art movement. This small collection of artists had two choices: emigrate or support the Communist regime. Those who chose to stay in Russia set forth their own artistic ideals as the vanguard of Communist culture--and in the process created a unique and lasting body of art and theory.

Lesser known members of the Russian avant-garde movement are six women whose contributions are equally important as their more famous male associates. This elite list includes Aleksandra Ekster, Natalya Goncharova, Lyubov Popova, Olga Rozanova, Varvara Stepanova and Nadezhda Udaltsova. Recently, their works were brought together by the Guggenheim Museum in an exhibit titled Amazons of the Avant-Garde. The exhibit is being shown at the Old Tretyakov Gallery (State Tretyakov Gallery) in Moscow, as well as in Berlin, Venice, Bibao, New York and London.

As we know, Amazons were the part fact, part mythical warrior women of ancient Russia as recorded in by Greek historian, Herodotus. So, what does this have to do with this exhibit and/or these six female artists? Nothing, really, except that they are considered by the exhibit's curator, Zelfira Tregulova, to have been powerful influences on avant-garde art and Soviet culture. Given the time during which they created (first 15 years or so of the 1900s), they were extremely independent, strong minded women who were also well-off and well educated.

Most of these six artists studied in art schools in France, Germany and Italy for further study and returned to Russia around 1912-13. At this time, they each began perfecting their own style and producing the revolutionary works we can see today. Most successful artists are mentored by another accomplished artist.

Natalya Goncharova (1881-1962), determined to blur or erase totally the line between male and female artists, dressed in men's clothes and lived out of wedlock with fellow Mikhail Larionov. Natalya was the most dramatic of the group of women and, as the eldest, served as somewhat of a matriarch.

Natalya very early on was intrigued with Russian iconography (The Evangelists; 1911), peasant needlework (Linen; 1912) and folk art. This is reflected in most of her work. With Larionov, Natalya founded the Donkey's Tail, an artists group which was a break away from the Jack of Diamonds group. The latter was interested in studying European art styles, whereas the Donkey's Tail group focused on Russian contemporary art. Natalya's religious icons outraged the Russian Orthodox Church partly because her use of darker town and primitive figures, and the tradition that icons are typically written by monks or other religious individuals.

In 1912, Natalya began producing paintings in the Cubist style using interesting angles and different colored blocks to form her subjects. The following year, she began her Rayist work in which subjects in her paintings would appear as illuminated rays of color and light. Natalya was considered the first generation of Russian avant-garde. It is not completely clear how this differed from the second generation, except to say that the elder artist did not sympathize with the Bolshevik Revolution as did the younger members. Natalya left Soviet Russia and settled in Paris in 1917.

Aleksandra Ekster (1882 - 1949) was an upper class lady who was the wife of a successful lawyer. She was a personal friend to Pablo Picasso and Georges Braque.

During the pre-Revolution years, Alexandra travelled regularly to France and Italy. Her work from this period reflects the influence of these regions. By the mid-1910s, Aleksandra's work incorporated elements of the Cubist collage with a movement towards the Suprematist. By 1917/18, her paintings had evolved to the point where any recognizable objects were gone. Aleksandra's works had become studies in blocks of bright colors. Along with her contemporaries, Aleksandra displayed her work at the 1921 5 X 5 = 25 exhibition in Moscow. At this time, the artists declared an end to non-practical art and a new focus on industrial design or Constructivism. For Aleksandra, this may not have been by choice, but rather a means of survival under the new Soviet regime. She and her husband left the Soviet Union in 1924, after which little is known of her or any pieces she may have produced.

In 1912, Nadezhda Udaltsova (1885-1961) and Lyubov Popova (1889-1924) studied Cubism together at the Academie de la Palette in Paris. Nadezhda was married to fellow artist Alexander Drevin, while Lyubov's partner was artist Alexander Vesnin. Popova bore a child in 1924. Both she and the infant died from scarlet fever. Nadezhda's husband was arrested in the 1930s for not conforming with Socialist Realism. Thought to be in prison, Nadezhda carried out an exhausting campaign for his release. She didn't realize that Drevin had been shot soon after he was arrested.

Nadezhda was one of the best examples of a pure Cubist artist. In Moscow, her works were exhibited by the Jack of Diamonds artist group. In 1916, she began to work in the Suprematist style with textiles and instructed others in this venue.

Lyubov, too, began with very large Cubist works. She tended to use larger canvases and was more interested in the exploration of color than constitution. By 1921, Lyubov was working in the Constructivist style and displayed her work at the 5 X 5 = 25 exhibit in Moscow. After this show and until her death in 1924, Lyubov concentrated on production design for the experimental theatre and work with textiles.

Varvara Stepanova was the youngest of the group (1894 - 1958) and, like her counterparts, was romantically involved with another artist; in her case, she was married to Bolshevik photographer Alexander Rodchenko. During the late 1910s, Varvara produced small paintings which combined abstract image with text from post revolution poetry. She did not excel in the abstract and by 1920 had turned to a systematic style of using colored geometric shapes to create her characters.

Her figures were more a technical study of construction than studies in color and light. Varvara was a leader in the emergence of Constructivism in Russia (1914-32) and dedicated much of her efforts towards industrial and theatrical design work. She believed that art must have practical use.

Considered non-conformists to Social Realism, both were banned from the Soviet art circles in the 1930s. The couple eked out a living doing piece work for stage settings in various area theatres.

Socialist Realism was the officially sanctioned art style of the Soviet Union from the early 1930s to 1980s and resulted in the many dramatic and dynamic portraits and events we are familiar with. It differed from Realism which is a mirror reflection of life and not always pretty or positive. The purpose of Socialist Realism was to promote the development of a classless society. It focused on the heroes and heroic events involved in the movement. In this way, it somewhat resembled Romanticism with its larger than life portrayals of heroic characters and their acts.

Avant-garde artists, using their various techniques, created propaganda posters and painted many of the grand murals and other trappings for celebrations of the Revolution's anniversary. The Soviets were very focused on the importance of industrialization and the artistic style of Constructivism went hand in hand with the Bolshevik vision of industrial might.

All too soon, Stalin and his idea of Socialist or Soviet Realism came along. Avant-garde was soon declared taboo, and the works of the Russian avant-garde artists were almost lost to history. Suppressed by Stalin and as yet virtually unknown to the West, these artists, especially the women, finally are receiving international attention and credit. The best permanent display of Russian Avant-garde is at the Marble Palace, part of the Russian Museum in St. Petersburg. 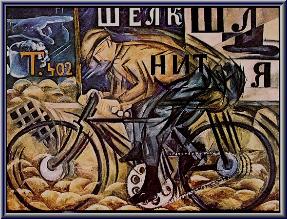 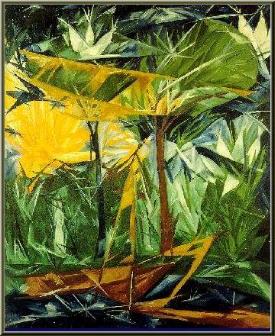 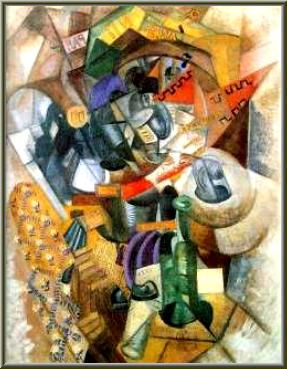 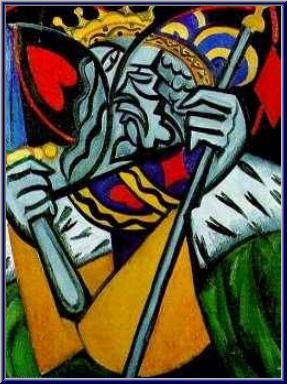 Rozanova; "color painting" 1915
Simultaneous Representation of a King
of Hearts and a King of Diamonds 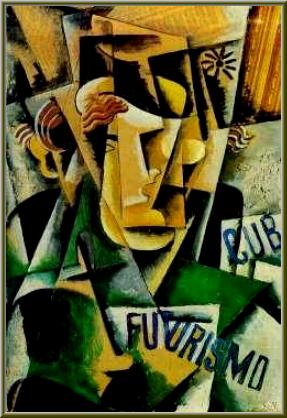 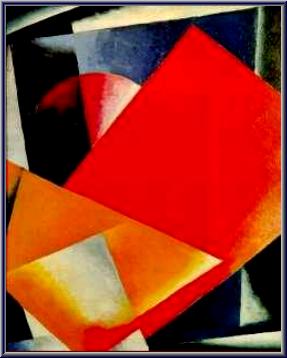