“Ra-ra- rasputin, lover of the Russian queen” went the refrain of a song by the group Boney M., Jamaican-born singers who were all the rage in my youth. This song reflected the popular allure of rumors about the depravity that gripped the final years of the House of Romanov, including that Tsaritsa Alexandra had been involved in illicit relations with a Siberian peasant, Grishka Rasputin, who was later killed by members of the Russian nobility. “Oh, those Russians!” as the song concludes.

[This article was originally published in the November/December issue of Russian Life magazine.]

Who was Rasputin? Why has his name become synonymous with the idea that the Russian monarchy was doomed? That is the real mystery.

It was not long after November 1905, when Nicholas II wrote in his diary “I have met a man of God, Grigory from Tobolsk Province,” before Rasputin’s authority was firmly established in the eyes of the royal family and beyond. A saintly elder, a spiritual father – this is how Nicholas and Alexandra thought of him, especially as Rasputin clearly had a hypnotic effect on people, and was able to stop their hemophiliac son’s bleeding, at least for a time, perhaps through hypnosis. The idea that Alexandra Fyodorovna could have had an affair with Rasputin is out of the question. The tsaritsa had many faults – she had fits of hysteria, was excessively nervous, and ineptly interfered in state affairs, but she sincerely loved her husband and would never have been unfaithful to him. For her, Rasputin was a spiritual teacher, nothing more.

What happened? Why did this “saintly elder,” who had been a source of spiritual solace to the royal couple, suddenly find himself the target of vicious hatred? Consider, for example, the reaction to Rasputin’s murder in December 1916, a reaction that can only be described as universal rejoicing. Newspapers published articles openly praising the murderers. Stories are told of people embracing and congratulating one another in the streets of Moscow, St. Petersburg, and Kiev. Grand Duke Alexander Mikhailovich, father-in-law of Felix Yusupov, one of the main conspirators in the plan to do away with Rasputin, recalled his conversation with the tsar’s mother, Alexander III’s widow Maria Fyodorovna: “As empress, she sympathized [with the murderers], but as a Christian she could not condone the shedding of blood, however valorous the motive may have been.”

So Rasputin’s murder was “valorous” in the eyes of the Grand Duke and the dowager empress? Of course murder is a sin, but…

If we are to believe the account of one of the murderers, Vladimir Purishkevich, a Duma member and organizer of the Black Hundreds rightist militia, a policeman was drawn to the sound of gunshots. Purishkevich supposedly asked the policeman whether he knew who Rasputin was and proudly informed him that they had just killed him. To this the policeman is supposed to have responded: “That’s a good deed you have done, gentlemen.” Of course this tale may be a fabrication – we will never know. But this description of the policeman’s reaction fits with what we do know of the anti-Rasputin sentiments that prevailed at the time.

What did Rasputin do to deserve this animosity?

As to whether or not Rasputin inserted himself into affairs of state, clearly he did. He certainly wrote notes to the tsar trying to get his associates government posts, and both Nicholas and Alexandra took his opinions seriously. And Rasputin’s ideas were not ill founded. For example, in 1912 he convinced the tsar to keep Russia out of the Balkan Wars – and Russia stayed out, which was probably a good thing. Apparently he also tried to convince Nicholas not to declare war in 1914. Had he succeeded, Russian history might have turned out very differently.

Rasputin was also rumored to be a German spy. These rumors were linked to similar suspicions of Alexandra’s loyalties. The logic here is simple: the tsaritsa was German and, assuming you believed she was betraying her husband with Rasputin, why not also believe she would betray Russia? Alexandra truly was a descendent of the German imperial family, however she grew up in England, at the court of Queen Victoria. In fact all of her initial interactions with Nicholas took place in English, not German. Later she made a great effort to become Russian. She converted to Orthodox Christianity and became an ardent believer, learned Russian, and by the outbreak of the First World War, at which point she had been living in Russia for 20 years, she was entirely invested in the interests of her adopted country, however misguided her concept of these interests might have been.

Rasputin, on the other hand, did actually advocate for an alliance with Germany over England. He was not alone: a good half of Russia’s foreign affairs ministry held the same opinion. Russia and England had just as many points of contention as Russia and Germany. The Anglo-Russian Entente of 1907 was the last piece of the puzzle to fall in place as the two opposing alliances took shape in the lead-up to war.

Be that as it may, the fact that Rasputin exploited the tsar’s good graces to expand his own patronage powers was surely not an ideal situation. But was Rasputin the only one guilty of this? For many years Nicholas II unquestioningly acquiesced to the endless stream of requests and advice from his various uncles and cousins, never finding the backbone to stand up to them. But taking advice from relatives was considered natural. By some accounts it was specifically these relatives who convinced the tsar to attend the celebratory ball at the French embassy held in honor of his coronation (in 1896), despite the tragic trampling of over a thousand people attending a coronation-related event on Khodynka Field. Yet nobody (except, of course, terrorist radicals) seemed to feel it would be a good idea to get rid of all those grand dukes.

But members of the State Duma, the grand dukes, the intelligentsia, and the policeman who came to investigate gunshots all seemed to agree that it would be a good idea to get rid of Rasputin. They all sincerely believed that if only this dreadful peasant could be destroyed, all of the country’s problems would disappear. “Nobody doubted that His Majesty would finally find for himself honest and devoted people,” one of the grand duchesses wrote. A simple solution!

By the time of Rasputin’s murder, the Duma had been demanding the power to appoint and dismiss ministers for almost a year. By then, the country had been fighting a war with no clear purpose for two years, at the cost of hundreds of thousands of lives. As has so often happened over the course of Russian history, one man was found who, it turned out, was the root of all problems – he was sleeping with the empress, spying for the enemy, and in general, was Satan incarnate – and if only he could be gotten rid of, all would be well.

Another aspect of the Rasputin legend that it is difficult to assess are stories about how hard it was to kill him – the poison-laced food and wine he was served had no effect, being shot at close range did not kill him, and even when he was thrown into the river through a hole in the ice, he was still breathing, despite the fact that his lungs were full of water.

Maybe he was just remarkably hearty. Or maybe half of these incredible details were made up by his murderers after the fact. Maybe the poison failed to work because of some chemical reaction with the food and wine. Or maybe the doctor who was supposed to supply the poison had second thoughts – as he himself later stated.

All these stories became part of Rasputin’s demonic image – a man with supernatural powers, a superhuman sexual predator with a mind-boggling ability to resist death. This mythology served to turn the act of murder from a crime into some sort of valorous battle against a three-headed dragon.

In the end, he may have been a simple Siberian peasant with remarkable abilities and a keen mind who soared higher into the imperial stratosphere than simple peasants are supposed to ascend. He wound up being turned into a symbol of everything evil, and was used to distract people from actual problems, such as the grain supply to Petrograd, military failures, or the stalling of reforms. 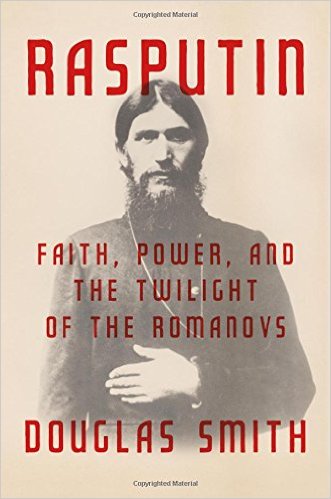 “In researching the final years of the old regime [an earlier book],” writes Douglas Smith in the intro to this new book on Rasputin, “I was repeatedly struck by Rasputin’s omnipresence. No matter what sources I happened to be reading... there was Rasputin.”

Scheduled for a November release, this new biography of “the most recognized name in Russian history,” can surely be called a tome. Settling in at nearly 800 pages, it takes an exhaustive look at the monk’s roots, rise to power, murder, and lasting legacy in Russia, in the process offering a rather detailed look at the empire’s twilight.

The last Tsarina of Russia and her role in the fall of the dynasty.