1. Send in the clowns! Or rather, ban them. And one in specific: Pennywise, the murderous clown from the horror novel-turned-movie It, is making professional clowns fear for their livelihoods. With a new film adaptation set to hit theaters next week, a comedy troupe in St. Petersburg protested the film. Clowns across Russia worry that the film will discredit their profession, making children fear for their lives rather than revel in the joys of red noses and balloon animals. 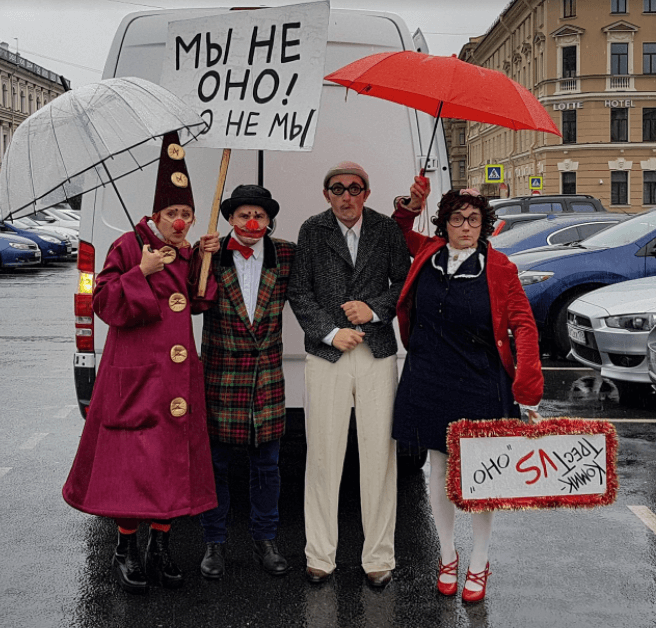 2. Cinema’s other movie villain this week: a prima ballerina. Not because she turns pointe shoes into a murder weapon, but because the movie, titled Matilda, insults the memory of Russia’s last Tsar, who was canonized in 2000. Incensed by the film’s depiction of Nikolai II’s affair with ballerina Mathilde Kschessinska before he became Tsar, Russian Orthodox activists have attacked several theaters, claiming that they are “forced to break the law.” Fearing more violence, Russia’s top movie theater chain announced that it won’t show the film. So much for the high culture of ballet.

3. Forget Bay of Pigs: Southern Russia saw a Highway of Pigs when pig farmers staged a protest. After authorities seized documents and computers, allegedly as part of a fraud investigation, the farm’s automated feeding mechanism ground to a halt, leaving 28,000 pigs oinking for slop and around 100 farmers protesting on the highway. There’s an ongoing investigation surrounding the pig complex – the largest in the Orenburg region – so it’s still up in the air who will bring home the bacon.

"It's no coincidence that [the film] originated in America; it would not have occurred to anyone in a morally healthy country. I recommend that Russians refrain from viewing it, or even better, that it not be shown in Russia at all. We should preserve our sacred things, our culture, including its symbols of joy like clowns and the circus.”
—United Russia Deputy in Sverdlovsk and former clown Anatoly Marchevsky on the negative impact of the movie It, and why it ought not to be shown in Russia.

1961
Chernushka orbits the earth aboard Sputnik 9

Reflecting on Russian: Tips from a Seven-Year Veteran