In 1701, the King of Prussia, Friedrich I, decided that he would like to have a palace room completely covered in amber. Work began on the walls to the room and continued until Friedrich's death in 1713. His heir, Friedrich Wilhelm I, insisted that the work be stopped and the completed wall panels were stored in the armory in Berlin.

In 1717, King Friedrich Wilhelm gave the Amber Room panels to Peter I of Russia as a gift. Even though the amber panels were highly admired, they were not mounted until 1743. Italian designer Bartolomeo Francesco Rastrelli was commissioned to assemble the panels in one of the rooms of the Winter Palace in St. Petersburg. The Winter Palace Amber Room was opened in 1746 and remained there until 1755 when it was moved to Tsarskoe Selo, the Russian emperors' summer residence.

The Tsarskoe Selo room chosen for the amber panels measured 10 m 10 m 7.8 meters. Three walls were covered with the amber with the fourth adorned with mirrors and mosaics comprised of stones from the Urals and Caucuses. The Amber Room ceiling was painted and the floor inlaid with wood and was finally completed in the 1770s.

During the Patriotic War against Nazi Germany, the enemy took the Amber Room and pack it away in the Königsberg castle, now Kaliningrad in Russia. This is the last known whereabouts of the amber panels and it is suspected that they were burned in a fire at the castle in 1945. Others speculate that art enthusiasts and Nazi officer, Erich Koch, took the Amber Room to an unknown location in the wake of the advancing Red Army. In 1958, Koch was sentenced to death for war crimes but was never executed leading some to believe he was kept alive in hopes that he would reveal the location of the amber panels. He did not.

Sergei Kaminsky has been working on a labor of love for the past 16 years. Since 1996, he has been painstakingly working to reproduce the panels of the Amber Room. The first two panels were displayed by Russian officials on February 19, 2002. The original Amber Room is said to have contained 8 panels and 1,300 square feet of amber.

The amber mosaic panels are on display at the summer palace, Tsarskoye Selo in St. Petersburg which is now a museum. The reconstruction work was based on over 100 year old black-and-white photos and the craftsmen used the original 1700s method of combining the Kaliningrad amber with honey.

Kaminsky and 50 other Russian craftsmen have been pouring over in excess of .5 million tiny pieces of amber in an effort to bring back to live this emperial treasure. The Amber Room panels are one of several projects being restored for the 300th anniversary of St. Petersburg in 2003.

The return to Russia of art seized by the Nazis during WWII has been a sensitive issue for several years. The Amber Room has been at the center of many related discussions. The Soviet Union endorsed the recreation of the Amber Room in 1979. However, due to lack of funds, little work was done until 1991 when the German gas company, Ruhrgas, decided to assist in the project. Germany returned recovered fragments of the room to Russia in 2000 as part of a trophy art exchange between the two countries. 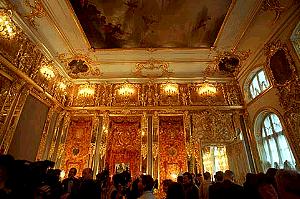 A Legal Message in a Bottle